Real Madrid will host Manchester City at the Santiagu Bernabeu in the UEFA Champions League semi-final, second leg. The match will take place on May 5, beginning at 00:30 IST.

We had exactly one week to catch our breath after an exciting seven-goal thriller in England. Now fans are sure to stock up on double portions of popcorn before another show worthy of a final.

Pep Guardiola is already anticipating a logical final against the equally brilliant Jurgen Klopp and his side, but is it in the pocket? Carlo Ancelotti’s charges could hamper this dream for sure. Either way, a hard-fought battle lies ahead, intrigue at its peak.

Carlo Ancelotti’s side officially sealed the Spanish title last Saturday. In 34 rounds of the Primera Division, Madrid amassed 81 points, enough to celebrate the trophy with four more games to go. With Karim Benzema (top scorer in La Liga, 26 goals) and Vinicius Jr (14 goals), the charges of Papa Carlo have scored 73 goals, more than any other team, while conceding just 29. They are in excellent form as well, with five wins in their last six games.

The championship was decided with a delightful victory at home – this time it was Espanyol who suffered a 4-0 thrashing defeat, although the Italian manager was careful to rest a number of the team’s leaders before the UCL`s sedond leg.

To reach the semis, the Spaniards have beaten PSG and Chelsea in previous rounds of the competition being in the underdog position both times. Benzema, who is currently the top scorer in this competition (14 goals), has proved to be instrumental in many of the Royal Club’s victories.

The previous leg demonstrated once again: Madrid are strikingly lucky – it’s already ingrained in the DNA of the Madrid monster. Although, after the first 15 minutes of the match at the Etihad, it was hard to compare Real Madrid with a monster.

Madrid conceded their first goal as early as the second minute on Manchester City‘s pitch. Soon the English champion scored another goal and Carlo Ancelotti’s side found themselves in a deep knockout. Others would have been finished off after that, but not Real Madrid. They have proved more than once that they can make the most of any moment in critical times.

Real managed to score one goal before the break, with Karim Benzema stepping up as usual. Maybe it was the moment that would later be described as the key one, as after it Real came alive and realised that things were not so bad.

The Whites lost, but the English club’s advantage is only one goal. Given all the circumstances and City’s incredible attacking strength, it’s safe to say that Real Madrid achieved a classy result on their opponents’ field. In the end, there are exciting chances to fight their way for the trophy, but there are no guarantees, of course. There is an extremely tough battle ahead.

Eden Hazard and Gareth Bale are in the club’s sickbay, as well as key centre-back David Alaba. Losing the Austrian is a real headache for Real Madrid.

And there is no doubt that Josep Guardiola is terribly disappointed by the first leg, even though his team won. 4-3 is clearly not a reason to celebrate. As awesome as Man City were in attack, they were just as bad in defence.

The strange thing is that, year after year, City’s inconceivable failures come at the most crucial moment – even if they had done so flawlessly before during Eurocup campaign. Apart from the recent match against Real, there are a few more glaring examples.

In the 2017 UCL, at the round of 16 stage, City lost shockingly in the return leg to French side Monaco after the same roof-blowing shoot-out (5-3) in the first match. They conceded three goals on home soil. This resulted in an exit by the away goals rule (6-6 agg).

The same situation came in the 2018\2019 campaign: then Pep Guardiola’s team lost to Tottenham in the quarter-finals (1-0; 4-3) again by the away goals rule.

As for the domestic competition, unlike Real Madrid, Guardiola’s side still have a brutal grind for the EPL title.

City and Liverpool have been just one point apart for a very long time. There are four rounds ahead – and so far everything is in the hands of the Mancunians. Four wins will guarantee them the title. But the tension is so high that it’s hard to sustain it. On top of that, there’s a tough fixture in the Champions League now.

It is Liverpool that have created a great advantage in the semi-final against Villarreal and can now comfrotably play on the road according to the score. The challenge for the Citizens is much more difficult: playing on hold here is fraught with danger.

The English might not go forward headlong, but their attack is capable of scoring, and scoring a lot. However, Real Madrid will also work on the mistakes of the first leg.

Statistical preview of the match Real Madrid vs Manchester City:

“The team is in good shape, motivated and focused. We face a big challenge and it’s a great opportunity to reach another Champions League final. There’s a good vibe, we’re aware of how tough it’ll be, but are feeling very confident. The tie is wide open and we’re currently at a slight disadvantage and want to put that right.”

“On the back of winning the LaLiga title, there’s a really good vibe and we’re capable of doing it. It’s a meeting between two teams with real quality, but that have different approaches. Your heart and character are important elements that allow you to display your quality. You’ve also got the individual quality and team commitment. You need all of that to win and having just one element doesn’t allow you to be successful in a competition as major and tough as the Champions League.” 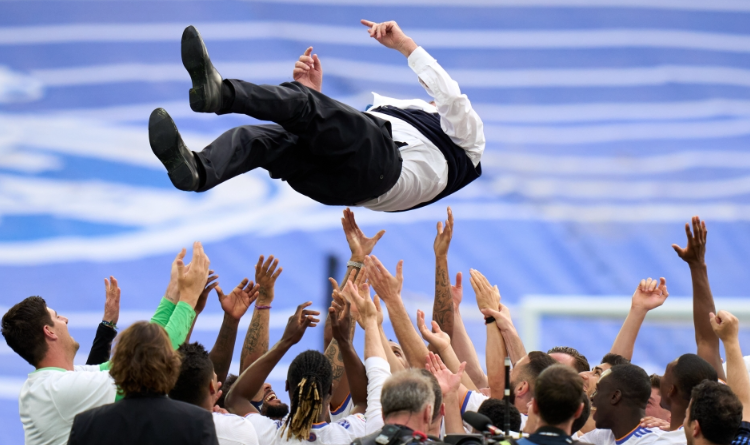 “We are two good teams. We saw it a week ago when we played. They are champions of Spain. We are trying to be champions. Both teams are good. I said a week ago we want to win and try and be in another final, for the second year in a row. But there is no guarantee the same guys will play the same way. I don’t know what will happen tomorrow. We will try and win the game with the best XI possible.”

We believe we will see a continuation of the scoring feast in the upcoming encounter. The Madrid side have no motivation to sit back, and it’s difficult to play purely defensively against such gigemonous and quality sides like Manchester City. Moreover, Josep Guardiola’s side shouldn`t play defensively-safe either, otherwise Real Madrid’s initiative will quickly change the course of the game: Los Blancos know how to realise moments, even if it will be just 2 of them.

We say: the match total over 2 and both teams to score – Yes.