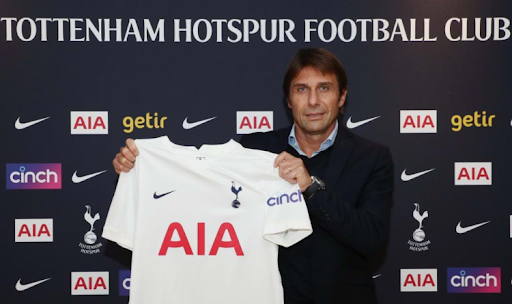 52-year-old with the Spurs home jersey

Spurs are excited about the new era: Antonio Conte has officially been appointed as Tottenham’s new coach. The London club have agreed a contract with the Italian until 2023 with the possibility of an extension.

The former Inter, Chelsea and Juventus coach replaces Nuno Espírito Santo, who was sacked the previous day. Conte’s task at Tottenham Hotspur will be to produce more interesting and daring football than under previous coaches, as well as to finally climb the table and get the trophies in the next seasons.

This is what the specialist said on his arrival:

“I am extremely happy to return to coaching, and to do so at a Premier League club that has the ambition to be a protagonist again. Tottenham Hotspur has state-of-the-art facilities and one of the best stadiums in the world. I can’t wait to start working to convey to the team and the fans the passion, mentality and determination that have always distinguished me, as a player and as a coach.”

“Last summer our union did not happen because the end of my relationship with Inter was still too recent and emotionally too involved with the end of the season, so I felt that it wasn’t yet the right time to return to coaching. But the contagious enthusiasm and determination of Daniel Levy in wanting to entrust me with this task had already hit the mark. Now that the opportunity has returned, I have chosen to take it with great conviction.”

“We are delighted to welcome Antonio to the Club. His track record speaks for itself, with vast experience and trophies in both Italy and England. I know first-hand the qualities Antonio can bring to us, having worked with him at Juventus, and look forward to seeing his work with our talented group of players.”

Also, insiders have revealed some details about the contract Antonio has signed with Tottenham.

The London club have offered the 52-year-old a deal with a salary of around €18.3m a year. By comparison, Pep Guardiola’s salary at Manchester City is €22m.

Spurs’ management were ready to give the Italian a big transfer budget to lure the specialist to the team. Previously, Antonio made it clear that he would like to strengthen the team with 3-4 new players in case of his appointment. The club are ready to allocate nearly €180m for transfers during the winter and the coming summer transfer window.

The Italian specialist will soon hold his first training session.