Klopp after Liverpool won the Carabao Cup on penalties: “Kelleher is the best number two in the world”   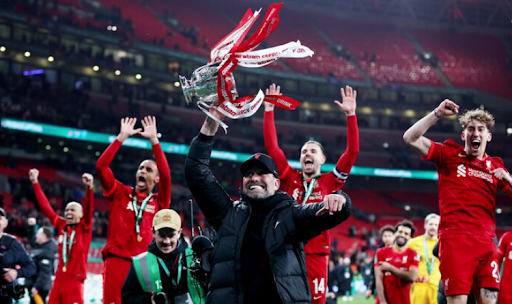 Another round of the English Premier League was diluted by the English League Cup final. It saw Chelsea and Liverpool face-off and this seemingly best draw of the season was turned into a penalty shoot-out that frayed fans’ nerves with its length. Twenty-two penalties! Liverpool emerged victorious, winning this trophy for the first time since 2012.

The League Cup is not the most important tournament in England. Here are the main things about the final.

The status of the English League Cup is so insignificant that Mohamed Salah and Sadio Mane only made their debuts for Liverpool in this tournament in the final. Salah has more games in the League Cup even now for Chelsea than Liverpool, while Mane scored his last goal in the tournament against Liverpool – while he was playing for Southampton. The tournament is either for reserve squads or average teams: at best it is the fourth most important one – after the league, European Cups and the FA Cup.

However, the very fact that Chelsea and Liverpool, Thomas Tuchel and Jurgen Klopp were facing each other was significant enough for the teams to produce a bright and very inspired match. Thiago Silva injured his shoulder early in the game but found the fortitude to continue. Midway through the second half, Salah went one-on-one with the goalkeeper and flicked it over, but it was Silva who was the player who read the moment and cleared the ball out of the empty net.

Speaking of goalkeepers. The only non-optimal player in the final was Caoimhin Kelleher. The 23-year-old Liverpool man made the first team after a series of disappointing goalkeeper transfers (Loris Karius, Adrian) and has been playing mostly in cup competitions. In the course of this League Cup campaign, he played three games to the final, winning a penalty shoot-out against Leicester – this obviously gave Klopp the reason to entrust the goalkeeper with the decisive game as well.

Tuchel did the opposite: Edouard Mendy was put in goal despite Kepa Arrizabalaga’s brilliant performances in the previous stages of the League Cup. And that decision proved useful: Mendy made a fine save in the first half when, even in the event of a goal, no one would have thought to blame him.

Despite 0-0 in regulation time, the ball flew into the net as many as four times before the penalty shootout. The teams managed 31 shots (20-11 in Liverpool’s favour) and 23 directly from inside the penalty box (15-8 in Liverpool’s favour). If we take the last rounds of the EPL, the content of this encounter was closest to Leeds’ shootout with Manchester United – there were 31 shots and 21 from the box (ending 4-2 in favour of MU).

Six or even seven goals in that pattern would not have been a surprise. The number of clear goalscoring chances suggests roughly the same – Opta counted seven such chances (not that every such moment should be realized, of course, but some goals could have come from the implicit ones). All in all, 0-0 was the most deceitful score (kudos to the goalkeeping performances of Edouard Mendy/Caoimhin Kelleher and the lack of composure of the attacking stars).

The game was a kind of benefit for linemen and video assistants: two goals by Kai Havertz and one each by Romelu Lukaku and Joel Matip were cancelled out. The last, though, was particularly questionable: Virgil van Dijk was inches closer to goal from a standard cross than the Chelsea players and never touched the ball.

Tuchel needed Kepa Arrizabalaga for a penalty shoot-out. The coach had previously pulled the trick of substituting the goalkeeper strictly for the 11-metre penalty shoot-out in the UEFA Super Cup. It worked then: Kepa saved two shots and helped Chelsea win the trophy.

“We always train and work through penalty shootouts before matches where they could purely theoretically happen. Can we simulate the exact situation? No, we cannot. But we can beat a certain pattern that makes us feel more comfortable.”

Tuchel said after the match.

That said, Arrizabalaga simply loves penalties: his conflict with Maurizio Sarri stemmed precisely from his unwillingness to change for the series in one of the previous League Cup finals.

But this time, it didn’t work out for Kepa. The series came out in such a way that absolutely everyone who finished overtime on the pitch struck as it progressed. Both Kepa and Kelleher conceded every shot, although on some occasions they were very close to a save (Kepa in particular nearly pulled the tenth 11-meter penalty of Ibrahima Konate) – until they had to come face-to-face. Kepa was unable to prevent Kelleher’s powerful shot from under the crossbar – and a minute later sent the ball over the crossbar himself.

“It is so nice that his inclusion paid off. He deserves it,”

Klopp said after the match about Kelleher.

“I am two things, a football manager and a human being and the human being won this time. He is a young boy, we ask him to do a lot, he starts playing in the competition and then we get to the final and I tell him he cannot play… In professional football there should be space for sentiment. At the training centre we have a wall that all goalkeepers are on who won something and Caoimhin can go on it – that’s how it should be – absolutely great.”

“It’s quite a story from when I saw him first time as a boy and the man he is today, he is an incredible talent. Kelleher is the best number two in the world. He had an incredible game. The life of a number two is you just have to be ready when you are called and the game he played tonight was absolutely incredible.

“I can remember at least two incredible saves, probably more, so he proves that the decision to line him up was absolutely right, and then in a very spectacular shootout he showed the whole range of his skillset.”