Barcelona is set to play against Real Madrid in the Spanish Cup semi-final. The match will take place on 12 January in Riyadh, Saudi Arabia, starting at 00:30 IST.

Big names, great match, one of the most popular rivalry. El Classico, ladies and gentlemen, stock up on popcorn. Fans around the world are eagerly awaiting the encounter – let’s try to find out what the game will be like and what we can expect from it.

Barcelona is a set of problems right now that are not solved at the snap of a finger, and Xavi Hernandez will take a long time to rebuild the team’s play so that they start winning on a consistent basis, as it was in the past.

Now they are unbeaten in five previous matches before travelling to Saudi Arabia. And looking monthss back – now it is a major achievement for the Catalan club.

However, few days later, Xavi’s side lost points in an away La Liga game against Granada (1-1). The opponents netted an equaliser just a couple of minutes before the final whistle. The key moment was Gavi‘s sending-off late in the second half.

Barça’s starting line-up for the upcoming match is far from the worst version, especially if you compare it with the recent games as in past matches, the new head coach has given the youngsters a chance to prove themselves, but now the final is on the line and he need the help of experienced players.

In the Spanish championship, after 20 rounds, the Blaugrana have eight wins and 8 draws with 4 loses, bringing them 32 points and sixth place in the Eurocup zone.

There are still some players that Xavi will not be able to rely on: Sergi Roberto, Eric Garcia, Pedri, Ferran Torres, Martin Braithwaite, Ansu Fati.

Real Madrid, meanwhile, are hurtling towards the La Liga title. Even now, in the middle of the season, it is hard to believe that anyone in Spain will be able to stop this machine.

At the weekend, Madrid easily demolished Valencia (4-1). In-form Karim Benzema and young super-talent Junior Vinicius scored twice each. Who would have thought they would tear apart everything with such a momentum.

And this match confirmed that the strange defeat to Getafe in the early days of January was a trivial setback. Real Madrid are in full swing – this is a fact.

By the way, Los Blancos have only suffered one defeat in their last 18 matches. It is amazing how Florentino Perez has found the right man for the return like Carlo Ancelotti. Apparently, this is the start of a great and very successful journey.

Real Madrid will be without Gareth Bale for the upcoming match and Diaz is doubtful.

It has been a long time since Real Madrid were defeated by the Blaugrana. Barça last beat their arch-rivals from Madrid in September 2019 (0-1). Since then, the Catalans have been unbeaten in five consecutive meetings, with Barcelona having been weaker than the Los Blancos in the last four games.

Last time, the teams met in La Liga last autumn and the match ended in a 2-1 win for Real Madrid.

Statistical preview of the match Barcelona vs Real Madrid: 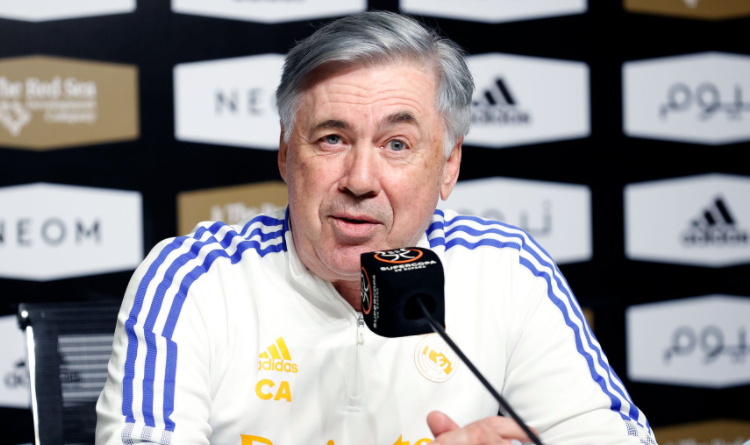 An experienced trainer has a positive attitude

“We head into the game with the utmost excitement and the right attitude that we need to try and come away with the Super Cup, which is the first trophy of the season. It’s a game where anything can happen. We’ll have to perform as best we can, whilst being aware that we’re up against strong opposition. They’ve had more problems than we have this season, but it’s a game involving two teams that have the same objective, which is to reach the final. The LaLiga standings don’t count for anything. This is a semi-final and the game starts all square at 0-0, it’ll be a tight match, just like the one at the Camp Nou in the first half of the season”.

The meetings between today’s opponents are special ones, but it is unlikely that anyone will risk their core players to reach the Super Cup final, especially title contender Real.  The match is more of a commercial nature, and the tournament will take place in Saudi Arabia. Therefore, we expect an even game and an exchange of goals.

Still, this match will be very difficult for Barcelona, including psychologically. They do not seem mentally ready for such high-profile and principled encounters.

In addition, in terms of the game Barcelona is not impressive yet, even taking into account the fact that the results recently really improved – they still score very poorly, maybe the transfer of Torres will improve the situation in the near future. In the meantime, the Catalans’ too-slow attack is unlikely to be a big problem for Madrid’s defence.