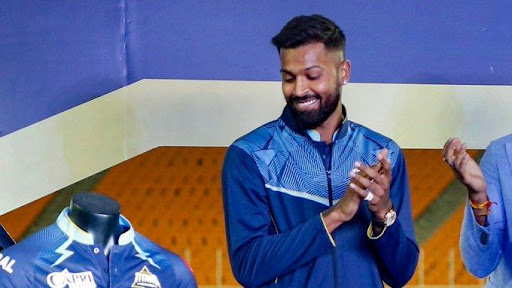 “To be honest, we are not here to prove anything, we are here to play good cricket,” says Hardik Pandya

Gujrat Titans skipper Hardik Pandya has opened up about the expectations from the upcoming edition of Indian Premier League 2022 for the franchise.

The Indian all-rounder Hardik Pandya is all set to lead the Gujrat Titans in the forthcoming edition of the Indian Premier League (IPL).

On Friday, the official Twitter account of the Indian Premier League posted a 30-second snippet from an interview with Hardik Pandya, as the all-rounder previews the upcoming season. The Gujarat Titans skipper insisted that they are not in the tournament to “prove anything,” adding that the side’s major focus will be on creating an environment where players can flourish.

This will be Pandya’s first assignment as a leader in the IPL franchise and the cricket pundits are eager to see whether he can fulfill the task reasonably or not. IPL 2022 will kick-off from March 26 and Gujrat Titans will play their first match on March 28.

Ahead of the tournament, Gujrat Titans skipper Hardik Pandya has opened up about the expectations from the upcoming edition of Indian Premier League 2022 for the franchise.

“I am quite happy with the team, it is a new team. To be honest, we are not here to prove anything, we are here to play good cricket. We are here to make sure the environment is right and players can flourish. There is no expectation as such, we are going to be a team which will make sure that it keeps improving,”

said Hardik in a video posted on the official Twitter handle of IPL.

Hardik has spent recent times on the sidelines followed by the injuries and he was sent to the National Cricket Academy for rehabilitation. Hardik’s last game came for India in the T20 World Cup in 2021.

“I was just spending time with the family, working hard as always. Make sure I prepare well,”

Gujarat Titans are placed in group B alongside Chennai Super Kings, SunRisers Hyderabad, Royal Challengers Bangalore, and Punjab Kings. The franchise will play their first match of the tournament against Lucknow Super Giants on March 28. The side is currently training at their home ground, the Narendra Modi Stadium, in Ahmedabad.