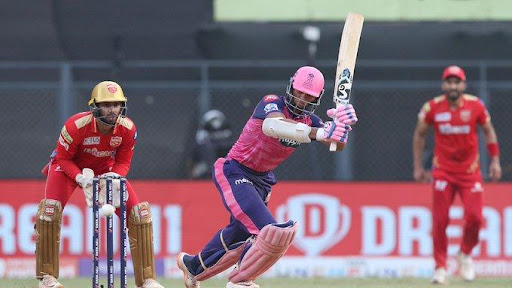 Yashasvi Jaiswal scored a brilliant half-century to get a six-wicket victory against Punjab Kings, Rajasthan Royals skipper Sanju Samson said that Jaiswal was due for a long inning as he spent a lot of time practicing in the nets.

Rajasthan Royals (RR) opener Yashasvi Jaiswal scored a brilliant half-century to get a six-wicket victory against Punjab Kings in IPL 2022, RR skipper Sanju Samson said that Jaiswal was due for a long inning as he spent a lot of time practicing in the nets.

A fearless half-century by Y Jaiswal and a three-wicket haul by Yuzvendra Chahal provided RR with a six-wicket win over PBKS at the Wankhede Stadium on Saturday.

“We all knew that he (Yashasvi Jaiswal) was due for a good inning. He spends quality time training and practicing, spending a lot of hours in the nets. Very happy for him,”

said Samson in the post-match presentation.

Samson added that the side was happy to chase the target as the wicket was really good to bat on.

“Really great intent shown by almost every batsman. I have been learning a lot, things have been getting clearer and clearer. Having the same side for almost every game helps to identify the situation and how to use the longer and shorter side, you need to keep on changing the bowlers according to the situation. There is no set strategy that fast bowlers have to bowl at the death, I feel anyone having a great temperament and having great experience can do the job for the team. He (Yuzvendra Chahal) said that he is even ready to bowl the 20th over, he is confident and he is doing well for the team,”

The skipper admitted that he wanted to go out and express himself freely by playing some big and sensible shots. He added that when things start getting busy, the side needs to come back to the basics and play one game at a time to look at the controllable.

“We will keep on giving importance to each and every game and then doing our best in every game. Let us see where we end up at the end of the league stages,”

In the game against PBKS, Jaiswal smashed 68 off just 41 balls, followed by a quick-fire 31 off 16 by Shimron Hetmyer which handed Rajasthan their seventh victory with two balls to spare.

Batting first, fifty from Jonny Bairstow (56*) and cameos from Jitesh Sharma (38*) and Liam Livingstone (22*) at the end powered Punjab Kings to a solid 189/5 at the end of 20 overs against Rajasthan Royals at Wankhede Stadium in Mumbai on Saturday.