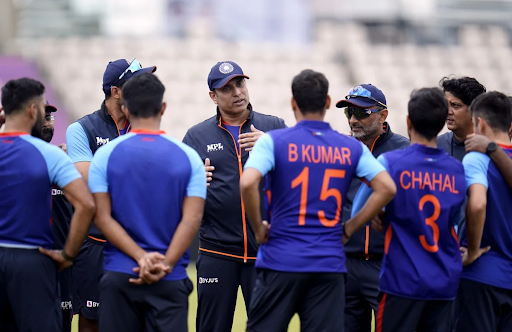 VVS Laxman will continue to coach the Indian side until the point in time the regular coach Rahul Dravid is ready to take over. Rahul Dravid is set to miss the initial stages of the Asia Cup 2022 tournament as he was recently tested positive for the coronavirus, and is being monitored by the medical team of the BCCI.

The Indian cricket board announced in a release on Wednesday, “Mr VVS Laxman, Head Cricket, NCA will be the interim Head Coach for Team India (Senior Men) for the upcoming ACC Asia Cup 2022, to be played in the UAE.

“Mr Laxman, who travelled with the Indian team that played the ODI series in Zimbabwe will oversee the team’s preparation in the absence of Mr Rahul Dravid, who tested positive for COVID-19 before the team’s departure to the UAE. Mr Dravid will join the team once he tests negative and is cleared by the BCCI Medical Team. Mr Laxman has linked up with the squad in Dubai along with vice-captain Mr KL Rahul, Mr Deepak Hooda and Mr Avesh Khan, who travelled from Harare,” the release said.

The Asia Cup 2022 tournament will kick off on Saturday, August 27 with Afghanistan taking on Sri Lanka in Dubai followed by the huge marquee clash between arch rivals India and Pakistan to be played on Sunday, August 28 at the same venue.

The excitement is building up gradually for the India-Pakistan clash which will witness the two teams facing off for the first time this year after their historic match at the same venue last year, where Pakistan had defeated India resoundingly by 10 wickets to record their first-ever victory in the history of the World Cup tournaments.

All eyes, however, will be on the batting stars in the two teams, namely Pakistan’s captain Babar Azam and former India skipper Virat Kohli, who in particular has been struggling for runs for more than a year and is currently under pressure to retain his spot in the Indian team.

There has been a plethora of support from all corners — including from Pakistan captain Babar Azam — for the Indian batting star, and it remains to be seen when Virat Kohli will be able to bring an end to the drought of centuries which began in November 2019.