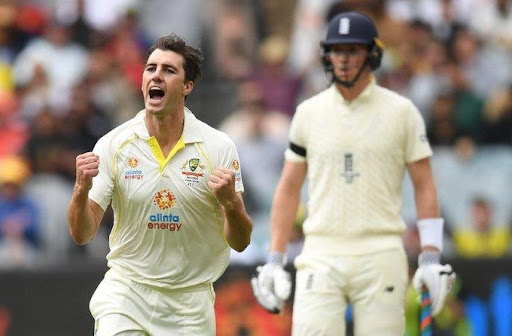 After heavy defeats in Brisbane and Adelaide, England needs to win the Melbourne Test to keep the five-match series alive. Meanwhile, Australia only needs a single victory or a draw to retain the urn as holders.

England’s batting order disappoints once again after bundling out on 185 on day 1 of the third Test at MCG, leaving the dream of Ashes on the brink of ruin after facing a relentless Australian bowling attack.

After heavy defeats in Brisbane and Adelaide, England needs a must-win in the Melbourne Test to keep the five-match series alive. Meanwhile, Australia only needs a single victory or a draw to retain the urn as holders.

But those hopes broke down when the Australian attack went through England’s batting order with Joe Root (50) and Jonny Bairstow (35) showing some resistance.

Australian skipper, Pat Cummins after missing the second Test at Adelaide due to the Covid-19 situation, and the off-spinner Nathan Lyon took three wickets each.

Australia then added further pain to their opponents by negotiating 16 overs to be 61 for one at stumps, trailing by only 124 runs. Marcus Harris stands unbeaten on 20 despite taking a nasty blow to the finger, and the night watchman Lyon is yet to open his account.

Apart from having a bad day, England bagged the crucial wicket of David Warner 38 (42) at the final moments of the day, when Jimmy Anderson took a thick edge towards Zack Crawley at the gully.

“As a bowling group, we know we are not going to give up any soft overs. You need to take 20 wickets to win the game and that’s our motive,”

said Australia’s Scott Boland, who made his debut and took the wicket of Mark Wood.

After batting collapses and poor bowling from England so far in the Ashes, Root and England look clueless as they scored below 297 in the five innings till now.

“Obviously the toss didn’t go our way, we’d also have loved to bowl in that first session,”

“Yes, we’re still looking for that big score. We’ve got to get stronger and tougher with our dismissals, we know that.

“But we’ve seen that the pitch offered plenty (for the bowlers) today and hopefully we turn up in the morning and put pressure on to get some early inroads.”

England openers Haseeb Hameed (0) and Crawley (12) looked unsettled and fell to Cummins after he won the toss and put England in to bat, with England hopes resting once more on Root in front of 57,100 fans at the MCG — less than expected due to Covid concerns.

Crawley earned his first Test chance since March, but failed to earn any benefit from it, taking an outside edge to a rising ball from Cummins that Cameron Green caught nicely at the gully.

His dismissal for 12 left England struggling at 13 for two with Dawid Malan and Root, the only two English batters to pass 50 this series, taking all the responsibilities.

Cautious Malan took 18 balls to get off the mark, but before getting settled at the crease another disaster struck near lunch when he got an edge off Cummins on 14 and went straight to Warner at slip.

Root played with an optimistic approach to move past South Africa’s Graeme Smith (1,656 in 2008) and took third place for the most runs scored in a calendar year.

Boland then snared Wood before Bairstow gloved Starc to Green and Australia mopped up the tail.