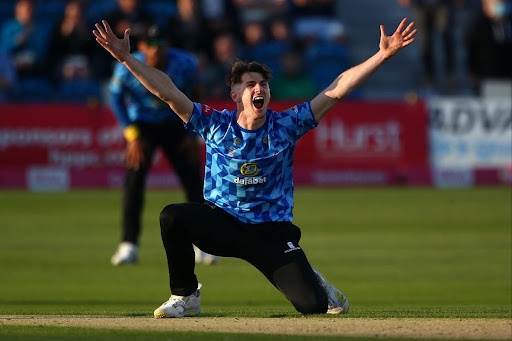 George Garton appeals for a wicket

Royal Challengers Bangalore has signed English all-rounder George Garton as a replacement for Daniel Sams ahead of the second half of the 2021 edition of the Indian Premier League.

On Saturday, the Bangalore-based franchise ramped up their preparations for the restart of the IPL 2021 by naming a new head coach and three replacements to their overseas contingent. Garton signing with the club has filled their overseas quota and fans should be expecting no more changes to the squad ahead of the restart.

Simon Katich has stepped down from the head coach position and Mike Hesson will be taking over in the position with Wanindu Hasaranga, Dushmantha Chameera, and Tim David the three new signings.

RCB’s latest signing George Garton is a talented all-rounder who can contribute with both bat and ball in hand and is an exceptional fielder as well. The 24-year old all-rounder has taken 29 wickets in 24 T20 Blast matches at a miserly economy rate of 6.32 and has 44 scalps to his name in 38 List A matches as well.

The Sussex all-rounder was a regular part of the Southern Brave playing XI in the recently concluded ‘The Hundred’ tournament. Garton helped his team win the inaugural edition of the tournament with his 10 wickets and useful knocks with the bat lower down the order.

After injuries and Covid-19 denied Garton his international debut, the Englishman would be looking to use the cash-rich league to propel himself in the running for the upcoming 2021 ICC World T20.