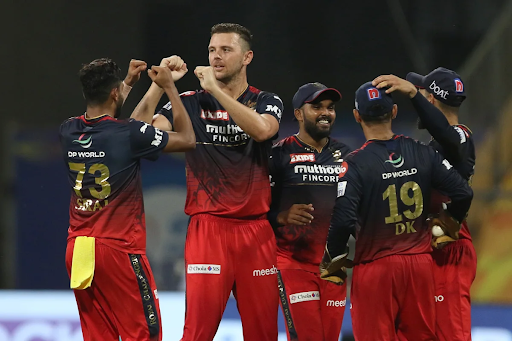 Royal Challengers Bangalore (RCB) recorded a 16-run victory over Delhi Capitals (DC) in the match number 27 of the ongoing Indian Premier League (IPL) 2022 tournament at the Wankhede stadium on Saturday night in a high-scoring contest.

After their all-rounder Glenn Maxwell and wicket-keeper batsman Dinesh Karthik brought up their respective half-centuries, scoring 55 and 66 not out respectively, Royal Challengers Bangalore, who reached a total of 189/5 in their 20 overs, restricted Delhi Capitals to 173/7 from their 20 overs.

Josh Hazlewood was the pick among the bowlers for Royal Challengers Bangalore as he returned with fine numbers of 4-0-28-3 whereas the right-arm fast bowler Mohammed Siraj took 2/31 from his 4 overs. RCB’s star spinner Wanindu Hasaranga was expensive as he took 1/40 from his 4 overs.

Delhi Capitals won the toss and elected to field as they were able to make early breakthroughs, dismissing Royal Challengers Bangalore captain Faf du Plessis for 8 and the other opening batsman Anuj Rawat for a first-ball duck.

The former RCB captain Virat Kohli was run out for 12 and Suyash Prabhudessai could manage only 6, but all-rounder Glenn Maxwell continued to fightback against the Delhi bowlers, scoring a fine half-century.

Glenn Maxwell hit 7 fours and 2 sixes to make 55 from 34 balls, putting on important partnerships in the middle overs. The Australian all-rounder added 27 runs for the third wicket with Virat Kohli, and added another 35 with Suyash Prabhudessai for the fourth wicket.

Glenn Maxwell was dismissed by Delhi Capitals spinner Kuldeep Yadav for his only wicket in the contest, but there was more to come from RCB batsmen. Dinesh Karthik and Shahbaz Ahmed powered them to a strong total at the end, adding 97 runs unbeaten for the sixth wicket.

Dinesh Karthik remained unbeaten on 66 from 34 balls with 5 sixes and as many fours, whereas Shahbaz Ahmed was not out on 32 from 21 balls with 3 fours and 1 six.

David Warner continued to play aggressively as he made 66 from 38 balls with 4 fours and 5 sixes, but apart from him and Delhi Capitals skipper Rishabh Pant, who made 34, there was no other batsmen in their side who could really trouble the RCB bowlers.

Delhi will next be seen in action on April 20 when they take on Punjab Kings whereas Royal Challengers Bangalore’s next meeting would be against Lucknow Super Giants on April 19.