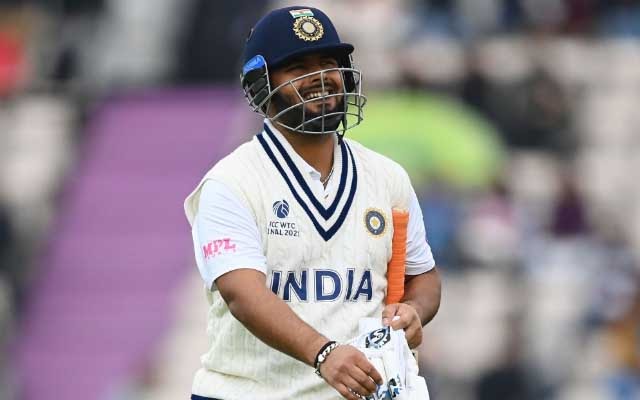 Rishabh Pant after his dismissal in the World Test Championship final

Rishabh Pant has tested positive for the Covid-19 virus and won’t be traveling to Durham for the warm-up match against a County XI scheduled to begin on 20th July.

The wicket-keeper batsman has already started his mandatory 7-day self-isolation period at his relatives’ place and would need to deliver at least a couple of negative tests for the fatal virus before joining up with the rest of the squad.

The Indian national cricket team is eyeing redemption ahead of the 5-test match series against England after losing the inaugural ICC World Test Championship final to New Zealand.

In view of better preparations for the upcoming test series, BCCI General Secretary Jay Shah requested the England Cricket Board for a couple of matches against select county XIs before facing the Three Lions in their own den.

Indian captain Virat Kohli and his team are involved in a 100-day tour of England that includes the already concluded World Test Championship final, the ongoing 20-day break after the one-off match, and the upcoming 5-match Test series against England.

BCCI allowed the players to go on leave for 20 days which saw many players attend the Wimbledon Championships and Euro 2020 being held in the United Kingdom.

Pant was pictured at the Wembley Stadium clicking selfies with the Indian cricket supporters during an England match during the continental championship.

The current Delhi Capitals skipper is asymptomatic and will recover soon enough to join the Indian squad ahead of the first test match on 4th August and might be involved in an intra-squad match before the first Test against England.

The Delta variant of the virus is rampant in the UK as of now and the ECB will be following even more severe and stringent protocols for the high-profile series against India. Recently, many England regulars were forced to self-isolate after multiple Sri Lanka players tested positive for the virus and Ben Stokes had to lead a second-string English squad to a 3-0 win over Pakistan in the recently concluded ODI series.