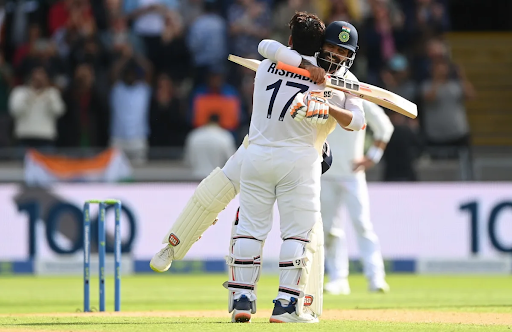 A brilliant century from Rishabh Pant and his 222-run stand for the sixth wicket with Ravindra Jadeja powered India to a strong position of 338/7 at stumps on the opening day of the fifth and final Test for the Pataudi Trophy 2021 being played against England at Southampton on Friday.

The Indian wicket-keeper batsman Rishabh Pant scored 146 whereas Ravindra Jadeja remained unbeaten on 83 not out as they defied a revitalised England and revived India from a precarious position of 98/5 in the first innings of the decisive Test match of the five-game series.

England bowlers made their captain’s decision of bowling first after winning the toss look totally a right call since they did not allow India’s batting line-up to open up on the first day on Friday. James Anderson was instrumental in making the inroads early on as he dismissed the new Indian opening pair of Shubman Gill (17) and Cheteshwar Pujara (13) to provide his side and early advantage.

In the absence of Rohit Sharma, India had to juggle their batting line-up which meant Cheteshwar Pujara moved one slot up from her usual but integration of No 3, which was occupied by the dependable Hanuma Vihari. However, none of these batsmen troubled the scorers much as the new England fast bowler Matthew Potts took over to dismiss Virat Kohli (11) and Hanuma Vihari, for 20.

The matters became worse for India when Shreyas Iyer was caught behind the wickets for 15 off James Anderson, with the Indian batsman failing to connect well on a short ball which was aimed at his body on top of the leg stump. Struggling at 198/5 in the first innings, India seemed to be giving away the control of the game to England but the pair of Rishabh Pant and Ravindra Jadeja had other plans.

In a well crafted partnership for the sixth wicket to put on another 222 runs for India, both Rishabh Pant and Ravindra Jadeja showcased immense skills, discipline and determination to thwart England out of the contest as far as play on the first day of this match is concerned.

England were also guilty of letting things slip away from their control as they bowled a lot of deliveries at drive-able length whereas misfields also cost them dearly and hurt their confidence out in the middle.

Rishabh Pant was splendid in his innings, hammering 19 fours and 4 sixes to make 146 from just 111 balls whereas Ravindra Jadeja showed tremendous application and patient 83 not out from 163 ball for that he has so far hit 10 boundaries.

India did lose a couple of wickets towards the end of the day’s play on Friday with Rishabh Pant falling to Joe Root and Shardul Thakur dismissed by England captain Ben Stokes, but they still had a score which was enough to intimidate any side in the circuit.