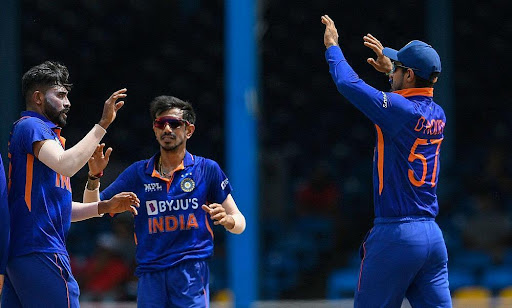 Rahul Dravid praised the professionalism of the young talent who has shown some remarkable performances to beat West Indies by 3-0 in their own backyard in the recently concluded ODI series.

Shikhar Dhawan became the only Indian captain who white-washed West Indies at their home ground after India beat the hosts by 119 runs in the third and the final ODI.

Rahul Dravid praised the professionalism of the young talent who has shown some remarkable performances to beat West Indies by 3-0 in their own backyard in the recently concluded ODI series.

“We came here with a really young team. A lot of the guys who played the England series didn’t play here and the way you guys have responded, the way you guys played in three games, and the level of professionalism you showed…,”

Dravid said in his dressing room speech after the final ODI.

“Couple of tight games and to get on the right side of those high-pressure games, some terrific performances under pressure was a really great sign for a very young team.”

“Really well done by Shikhar. I think he led very well. Well done to all of you, terrific performance.”

Dhawan said this young Indian team has the potential to achieve many more successes in the future.

“As a team, we would like to thank the support staff and all the team members who have helped us. Really appreciate your support. And well-done boys, both batting and bowling unit.

“You guys did amazing. You guys are young and have the vision to become much more than what you are today. You guys have already started taking those steps and you guys will go a long way,”

The skipper ended his speech with a triumphant yell:

“Who are we? Champions.”

The action now shifts to the five-match T20 series against the West Indies to begin in Tarouba on Friday.

“Tough one for us, felt we could have been on the other side of the series. Today, we did not show up. We’ve had a lot of games in a short period of time. We’ll go with a lot of learnings to the next game. We thought we had it halfway, with DLS….The batters were good in two games, the bowlers too we didn’t get wickets but we are ticking boxes. Guys are getting more confident and hopefully, we can get super league points. We just won a T20 series, so hopefully, we continue to entertain the crowd and perform well,”