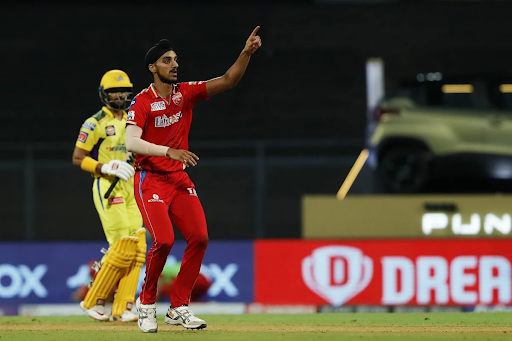 Shikhar Dhawan smacked 88 not out to power Punjab Kings to an 11-run win over Chennai Super Kings in their Indian Premier League (IPL) 2022 match played at the Wankhede Stadium in Mumbai on Monday night.

After Punjab Kings posted a strong total of 187/4 batting first, Ambati Rayudu nearly won the game for Chennai Super Kings with a superb 78 but his effort went in vain as the four-time winners CSK finished short by 11 runs.

While the defeat for Chennai Super Kings kept them at the second last spot in the IPL 2022 points table, the Mayank Agarwal-led Punjab Kings moved up to the sixth place with 8 points in 8 matches, having won 4 and lost 4.

Their Net Run Rate remained in negative at -0.419, but PBKS would take their second win over CSK as they had earlier won the first league game between them by a big margin of 54 runs.

It was Chennai Super Kings who won the toss and invited Punjab Kings to bat first. The opening pair for PBKS did a fair job of adding 37 runs before they were separated, with Mayank Agarwal caught at point by Shivam Dube off Maheesh Theekshana for 18 from 21 balls.

Punjab Kings were bolstered by a 110-run partnership for the second wicket between the senior India opener Shikhar Dhawan and Sri Lanka’s Bhanuka Rajpaksa, who made most of the two lifelines that he got from the CSK fielders to make 42 from 32 balls with 2 fours and 2 sixes.

The left-handed Shikhar Dhawan also made most of the scoring opportunities against Chennai, finishing at 88 not out from 59 balls with 9 fours and 2 sixes. The English all-rounder for Punjab, Liam Livingstone hit 2 sixes and 1 four to make 19 not out from 7 balls, helping his team to a strong total.

Chennai Super Kings lost far too many wickets at the top of the other to get pegged back. Their explosive opening batsman Robin Uthappa was dismissed for 1, all-rounder Mitchell Santner for 9 off Arshdeep Singh and Shivam Dube was removed by Rishi Dhawan, who took 2/39 from 4 overs on his comeback.

With their side in tremendous pressure, the experienced CSK batsman Ambati Rayudu played a counter-attacking innings of 78 from just 29 balls, hitting 6 sixes and 7 fours in the process. Ambari Rayudu did get support in the form of their captain Ravindra Jadeja and former skipper Mahendra Singh Dhoni for 21 and 12 respectively.

The dismissal of Ambati Rayudu in the 18th over shut the doors on CSK as their remaining batsmen could not take their side over the line. PBKS used as many as six different bowling options, but their plan worked alright with Kagiso Rabada and Rishi Dhawan taking 2 wickets for themselves.