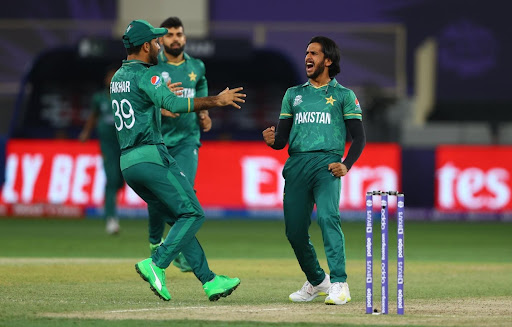 Pakistan has defeated Namibia by 45 runs at Dubai International Cricket Stadium on Tuesday to become the first team to qualify for the semi-finals of the tournament.

The men in green showed an outclass performance with the bat and ball to restrict Namibia on 144/5 before posting a competitive target of 189/5 in 20 overs.

Earlier, Pakistan skipper Babar Azam has opted to bat first to test the skills of his batters. Previously, they had won three of their three games while chasing.

Namibian bowlers kept Pakistan batters quiet for some time with their tight line and length bowling. Babar was hitting in the gaps but Rizwan could not find his rhythm.

The duo managed to score 29 in the powerplay while the score reached 59 in the middle of the innings.

However, it was just a matter of time after both the batters went all over Namibian bowlers. Meanwhile, Babar completed his third half-century of the campaign.

Babar and Mohammad Rizwan reached another 100-run stand to become the only pair to achieve the milestone five times in the T20I’s.

The skipper finally got dismissed by David Weise in the 15th over after scoring 70 off 49 balls followed by seven boundaries.

After the 27-year-old went back to the pavilion, Fakhar Zaman followed his path after scoring 5 off Jan Frylinck.

Mohammed Hafeez joined along Rizwan to end the innings in a blistering way. Rizwan hit 24 in the last over to remain unbeaten on 79 off 50 balls. He smashed eight fours and four maximums.

While the professor scored 32 off 16 balls including by five boundaries.

While defending the target, Hassan Ali ripped off the stumps of Michael van Lingen’s (4) in the first over with a brutal delivery.

Namibia went slow after their early dismissal but Stephan Baard and Craig Williams scored a 47 runs stand to steady the ship but Haris Rauf got run-out Baard (29) in a mix-up.

Do not miss: Jasprit Bumrah reveals the reason behind India’s poor performance in the World Cup

Skipper Gerhard Erasmus joined the forces with Williams to hit a couple of boundaries as the run rate was running high.

He fell off Imad Wasim after trying to play over the cover where Shadab Khan took an easy catch.

The vice-captain Shadab Khan ended his spell with a dismissal of Williams, who played a knock of 40 in 37 balls including five fours and a six.

David Wiese started his knock quite unusually but played some strokes at the end of the innings. He scored 43 off 30 balls and remained unbeaten.

Pakistan restricted Namibia to a total of 144/5 in 20 overs.

Rizwan was named as Player of the Match for playing a brilliant knock of 79 not out.

Pakistan will play their last Super 12s group stage match against Scotland on October 7 in Sharjah.

“It was a different plan today, wanted that opening partnership to go deep and it worked for us. Two good players in Hafeez and Hasan Ali, they’ll be important in the next stage and it was important we ticked those boxes…Everything has gone according to plan, we’re looking forward to the semi-finals and playing our cricket with the same intensity”

He praises the Namibia bowling and says he had to take the innings deep, as it was difficult to start off (according to Bazid Khan, who is handling the presentation). The plan was to take it deep and get runs at the back end. All the boxes ticked for the tournament, he thinks Pakistan is in with a fighting chance.

“We knew from the start that Pakistan is high quality, they look like title contenders, we knew we’d have to compete hard and I thought we did that for quite a while…[Next games] Doesn’t get any easier, NZ is quality but we’ll take confidence and try to take that game as deep as we can. We’ll be looking to get some great exposure for our players, you gain the confidence and it shows we can operate at this level. [Finger injury?] Finger’s sore but you have to get through, it’s a real milestone for cricket in Namibia.”