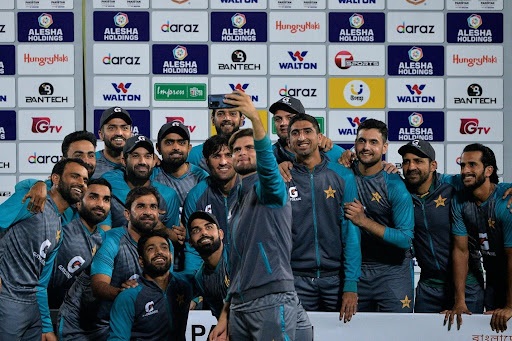 Pakistan beats Bangladesh by 3-0 in the three-match T20I series after a nail-biting last-ball victory in the third T20I by 5 wickets at Dhaka Sher-e-Bangla Cricket Stadium on Monday.

The men in green chased down the target on the last ball of the match by 5 wickets to clinch the series title by 3-0 after restricting Bangladesh to 124/5.

Earlier the day, Bangladesh skipper Mahmudullah opted to bat first for the third time in the series. The home side had a shaky start once again as they lost Najmul Hossain Shanto in the second over.

Shahnawaz Dahani who made his debut in green shirt, bowled a superb yorker to remove Najmul on 5 runs. Meanwhile, Bangladesh opted for a slow approach in the middle overs.

Babar Azam introduced the spinners after the powerplay. Usman Qadir got the better of Shamim Hossain (22) in the eighth over while he dismissed Afif Hossain (20) in the 15th over.

Usman Qadir finished on 2/35 while his fellow spinner Iftikhar Ahmed conceded 13 runs in the four overs.

The opening batter of Bangladesh Mohammad Naim put a notable contribution towards the side after scoring 47 off 50 balls. He hit two boundaries and as many maximums.

However, Mohammad Wasim was the top pick from the bowlers as he ended on the figures on 2/15 in his four overs spell.

While chasing, Babar Azam and Mohammad Rizwan were cautious as they only managed to score 28 in the powerplay. Babar 19 (25) failed again to score big after losing his wicket to Aminul Islam.

Bangladesh kept things tighter in the middle as a result Rizwan lost his wicket after scoring 40 off 43 balls.

The emerging Pakistan young player Haider Ali looked set with his bat and strokes and it looked as if the visitors will chase down the total in no time but the twist came in the final over when Pakistan needed 8 runs.

Bangladesh skipper Mahmudullah bowled the final over to defend eight runs which he started well after dismissing Sarfaraz Ahmed (6) and Haider Ali (45) on second and third delivery.

Iftikhar Ahmed came next and hit a six but fell on the next delivery. Pakistan needed 2 off the last ball and Mohammad Nawaz hit a boundary to take his side home.

Haider Ali was awarded as man of the match for his 38 balls 45 while Mohammad Rizwan was named as player of the series for scoring 90 runs in three games.

The way everyone has put in the efforts, credit goes to the players. You can always improve. Like our fielding has improved, our middle order has won games for us. Whatever mistakes we made, we want to make sure we don’t repeat them in the upcoming games. We want to carry this momentum into the Test matches. I want to thank the fans here.

When you play for the country, you are obviously happy and you cannot put that into words. The pitch was a tricky one. And whenever you play away, you get to play on different kinds of pitches. But we try to stick to our process. I have built some momentum in my batting and keeping over the last one year. I would like to thank the fans, it seems as if we are playing in Pakistan.

The pitch was a difficult. Rizi bhai supported me and told me we want to play till the end. It became close towards the end but thankfully, we ended up on the winning side.

Batters from both sides struggled. You need to spend some time on the crease before you can capitalise. Naim batted well, I think. [On the last over] I really appreciate the way Taskin came back after injuring his bowling hand. Great character shown by him.