New Zealand outplayed Bangladesh to get back in the series 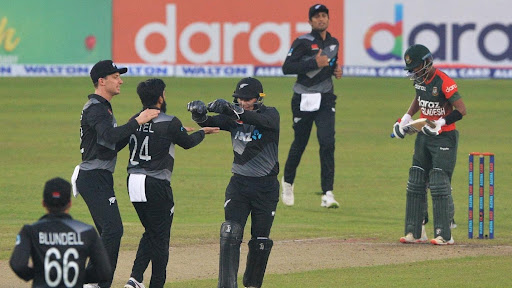 New Zealand found its way back in the third T20 to get back in the five-match T20 series with Bangladesh on the back of Henry Nicholls, Tom Blundell, and Ajaz Patel to seal a dominating 52 runs victory at Dhaka on Sunday.

Nicholls and Blundell helped New Zealand recover from 62/5 to get back in the series after putting an unbeaten 66 runs stand and Patel struck four to bundle out the hosts on 76.

New Zealand won their second game in Bangladesh in the last decade and another surprising thing happens in the third T20; for the first time, there were no six hits in the T20I match between two Test-playing countries.

Opting to bat first, New Zealand had a good chance of breaking down Bangladesh earlier. Finn Allen made a strong start after hitting three boundaries in the first eight balls.

However, he chipped a slower ball at mid-on on the third over of the game.

Bangladesh had a simple game plan to keep bowling slow deliveries to get hold of the strike rate. Meanwhile, Rachin Ravindra and Will Young made a crucial 27 runs stand to make the innings get going.

Although, from there, New Zealand’s top order lost the grip as Young and Colin de Grandhomme got undone by Mohammad Saifuddin both dismissed similarly – flicking the ball off an off-cutter to the on the side.

While Ravindra was bowled on 20 when he tried to slog a tossed-up delivery from Mahmudullah.

Tom Latham came next and he chipped a flat delivery to Mahedi Hasan to leave New Zealand trembling at 62/5 in the 11th over.

It was the second time New Zealand had batted the whole 20 overs without hitting a six, before that it happened against South Africa in 2009 but Henry Nicholls and Tom Blundell made sure that the bowlers get a fighting total.

They made a dominant 66 runs standoff 55 balls with 46 runs came in the last five overs to give the innings a late push for a decent total.

The Bangladesh top-order failed the day after playing some poor cricket. Liton Das hit two boundaries in the third over but Cole McConchie trapped him in an lbw.

Mahedi Hasan got dismissed while pulling a length ball to short midwicket. Shakib Al Hasan bagged a duck trying to slog from outside off.

Ajaz Patel struck twice in an over to get Bangladesh on 25 for 3 and Mohammad Naim‘s (13 off 19) dismissal soon after that made things even worse.

It was the Ajaz Patel day as he struck again for two consecutive wickets in Mahmudullah and Afif Hossain on consecutive deliveries to leave New Zealand on top at 43 for 6.

The game was pretty much done then with Rahim struggling in the middle before ending with 20 off 37. Cole McConchie too had his share of fun to end with 4-0-15-3.

“A really good performance – the way we were able to build partnerships even though we lost quite a few wickets upfronts…I thought the spinners were fantastic in all three games. The conditions are different from what we have back home, but looking at the Aussie series, there were no surprises for us. I still feel we have a bit left in the tank for a complete performance,”

“I think as a spinner you thrive on conditions like this. It was nice to get a few up at the top and our spinners collectively did a good job. I think both Cole and Rachin bowled brilliantly and we identified what ball was the hardest to play on this surface…Yeah, Dan gave me clarity about what more these conditions can offer you, said player of the match,”

“The bowlers did a great job to restrict them to 130. We started well, but we lost wickets in a cluster, and couldn’t capitalize on it. I think the middle order has been batting well, the top order has been doing a good job, what was missing were the partnerships and hopefully, we can come back hard. Still, two games to go, and hopefully we like to win the next game and the series,”

Do not miss: Latest updates of Bagladesh for T20 World Cup