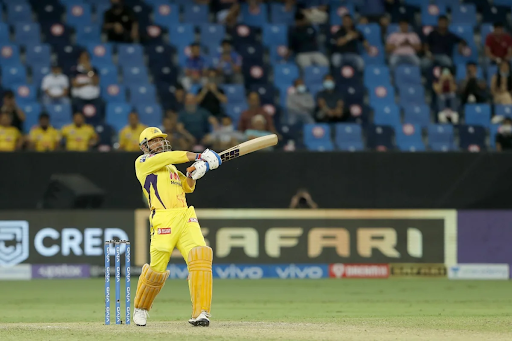 MS Dhoni turned back the clock to fire Chennai Super Kings into the final of the Indian Premier League (IPL) 2021, powering his team to a four-wicket victory against Delhi Capitals in the Qualifier 1 of the tournament played at the Dubai International Cricket Stadium on Sunday night.

Dhoni smacked three fours and one six to make 18 not out from only 6 balls as Chennai Super Kings scored 173/6 in 19.4 overs to record a victory over Delhi Capitals, and end their three-match losing streak in the IPL 2021 tournament, which they had suffered at the end of the group stage in the UAE.

Chennai Super Kings’ opening batsman Ruturaj Gaikwad scored 70 from 50 balls with five fours and two sixes, and senior batsman Robin Uthappa made 63 from only 44 balls, studded with seven fours and two sixes, to provide their team a strong platform for victory against Delhi Capitals, who had finished at the top of the IPL 2021 points table.

Earlier in the contest, Delhi Capitals were served well by half-centuries from Prithvi Shaw, who made 60 from 34 balls with the help of seven fours and three sixes, as well as a brilliant 51 not out from Rishabh Pant, who faced 35 balls and hit three fours and two sixes. Towards the end, Shimron Hetmyer also contributed heavily with 37 from 24 balls with three boundaries and one six.

Delhi Capitals finished at a strong total of 172/5 from their 20 overs despite some of their key batsmen such as Shikhar Dhawan (7), Shreyas Iyer (1) and all-rounder Akshar Patel (10) failing to make any sort of impact on the scoreboard.

Chennai Super Kings bowlers Josh Hazlewood and a few others produced a spectacular performance. Hazlewood returned with figures of 4-0-29-2 whereas the others in Ravindra Jadeja, Moeen Ali and Dwayne Bravo all took one wicket each.

Chasing a big target, Chennai Super Kings were rocked early when Delhi Capitals fast bowler Anrich Nortje removed the three-time title winners’ opening batsman Faf du Plessis for only 1. The dismissal of Du Plessis brought the pair of Gaekwad and Uthappa together, as the two batsmen added 110 runs for the second wicket to put Chennai Super Kings in command of the chase.

However, Chennai Super Kings’ move of promoting Shardul Thakur (0) backfired and there was additional pressure on them when Ambati Rayudu and Moeen Ali were dismissed for cheap scores of 1 and 16 respectively. This was when Dhoni took matters in his own hands to score the winning runs for Chennai Super Kings.

Dhoni said after the match

“I’ve not done a lot in the tournament, so wanted to look for the ball and see what the bowler can do. I was batting well in the nets. But I wasn’t thinking too much, if you think too much while batting then you mess your plans up.”

Dhoni hit a six on the second last ball of the 19th over from Avesh Khan to start off his scoring spree, which saw him hitting three more boundaries in the final over off England and Delhi Capitals fast bowler Tom Curran, to powered Chennai Super Kings into the final.

While Chennai Super Kings have now qualified for the IPL 2021 final, Delhi Capitals will get one another chance to have a shot  at it when they face the winner between Royal Challengers Bangalore and Kolkata Knight Riders in Qualifier 2. KKR and RCB will meet in the Eliminator contest on Monday night.