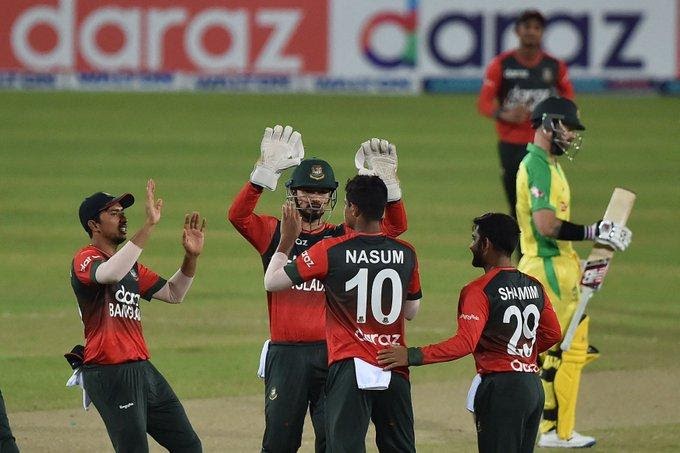 Bangladesh held their nerves in the third T20I, a game which had enough twists and turns till the last over, to clinch the historic series title by 3-0 over mighty Australia in the five-match T20I series.

Bangladesh had won the toss and decided to bat first. Bangladesh was off to a traditional lousy start. Australia introduces Josh Hazlewood in the second over of the innings and he took the wicket on the last ball of the over.

In the next over, Adam Zampa took the wicket of Soumya Sarkar who tries to sweep him but out in an lbw trap.

Shakib al Hasan and Mahmudullah tried to steady the ship with a couple of fine shots. Shakib shifts to the highest gear with boundaries now and then after the loss of two wickets.

But a great partnership breaks down when Zampa took the wicket of Shakib and sent him to the pavilion.

After Shakib, Afif Hossain came to bat and started the innings aggressively. He played some watchful innings but couldn’t take that long after he calls his partner to single, was undone when he couldn’t reach the line, with Alex Carey running Afif out for 19.

After Afif, Shamim Hossain came and tried to go big but misplaced the shot to get dismissed by Hazlewood.

Nurul Hasan came next to bat with an intent to play long but he lost his wicket in a mix-up after Mahmudullah calls his partner to single, was undone when Nurul suddenly stopped, with Moises Henriques hitting the stumps.

Bangladesh keeps losing wickets but Mahmudullah was still on the crease. He hit a couple of fine boundaries but lost the wicket on the last over of the innings.

Ellis took another wicket and was on the hat trick. The Australian young gun finally picked up the wicket of Mustafizur Rahman to complete his hat-trick and restrict Bangladesh on 127-9 after 20 overs.

The match was handed the Bangladeshi bowlers in a do-or-die situation but Nasum Ahmed took the first wicket on the 2nd over of the innings and set out Mathew Wade to the pavilion.

Both Ben McDermott and Mitchell Marsh were in a good form and made a great partnership (63). Runs keep flowing for Australia.

But their partnership breaks down when Shakib came to bowl and took the wicket of Mcdermott.

After Mcdermott’s wicket, Henriques came to bat but got dismissed by Shoriful Islam on a slower ball.

Meanwhile, Marsh completed his half-century in the 17th over and he needed to go big from there as the run-rate was going up after each ball.

Shoriful Islam got the better of him after he skied the ball in the air to give an easy catch.

Mustafizur came to bowl in the second last over of the innings by giving just 1 run. On the last over, Australia needed 22 runs on the 6 balls.

Carey hits a six on the first delivery of the over but couldn’t stand his team on the winning side.

At one moment, the match was totally in Australia’s favor but Mustafizur’s amazing death over bowling had stolen the match from Australia.

Bangladesh won by 10 runs to clinch the memorable series title by 3-0 in the five-match T20I series.

“Boys stood up during important times. It was incredible to see the boys fight today. When I and Shakib were batting, we wanted to bat till the 16th or 17th over as we thought it wouldn’t be easy for the new batter. We focussed on our process today and held it together,”

said Mahmudullah, player of the match.

When we were about to enter the field, I wanted Shakib to have a word. All the bowlers did their homework. Mustafizur was brilliant tonight. We had a chat in Zimbabwe that we need to step up as we think we are a balanced side. We are on a pretty decent side than the ranking suggests. We just need to be sensible while executing our skills.”