Jason Roy stars as England down Bangladesh by 8 wickets 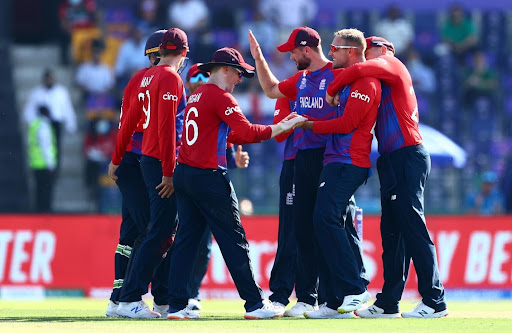 England has outclassed Bangladesh by 8 wickets on the back of a marvelous performance from Jason Roy in Group 1’s encounter of the ICC Men’s T20 World Cup 2021 at Sheikh Zayed Cricket Stadium in Abu Dhabi.

Jason Roy starred with the bat during the chase after bowlers executed a resounding performance and restricted Bangladesh to a modest total of 124/9.

England has won two out of two matches to cement the top position at the points table of group 1 after gaining four points.

Earlier the day, Mahmudullah had won the toss and opted to bat first, which ultimately backfired as they lost three wickets inside the power-play.

Moeen Ali removed the opening pairs back to back while Adil Rashid grabbed a stunner at fine-leg to Shakib Al Hasan on 4 runs.

Mushfiqur Rahim and Mahmudullah which are senior batters of Bangladesh recovered a 37 runs stand after the power-play but Liam Livingstone with his variations dismissed both the batters in his three overs spell.

Mushfiqur scored 29 while Mahmudullah made only 19 runs. Tymal Mills troubled the lower-order batters with his pace including Nurul Hasan and Nasum Ahmed who made the contributions of 16 and 19 respectively.

Mills finished with the figures of 3/27 while Moeen and Livingstone picked up double wickets each.

Do not miss: Why Kagiso Rabada refuses to kneel for BLM movement

While chasing, Jason Roy dominated while Jos Buttler (18) and David Malan (28*) joined the forces around him. Roy smashed 38 balls 61 followed by three maximums and four boundaries.

England chased down the target of 125 in 15 overs with the loss of two wickets. Nasum Ahmed picked up Buttler in the fifth over while Shoriful Islam dismissed Roy in the 13th over.

“Definitely, we were disappointed with the batting, it was a good wicket but we didn’t start well and didn’t have any partnerships in the middle either…We are more skilled hitters than power hitters, we don’t want to change that because we believe we can post good totals. We need to reassess and come up with a good plan,”

“The bowlers have started the tournament exceptionally well, they’ve adapted really well again today, very disciplined and backed up with good catching and ground fielding…The way Jason plays is so imposing, makes it difficult to set fields, so great to see him in good touch,”

“Very special match for us, we had to back up our last performance and came out firing with the ball. A lot of credit to our bowlers again…Today I hit a few gaps but it’s definitely a case of keeping wickets in hand and then powering through the back end. [Facing spin] It’s a part of my game that’s improved a lot, today was a big test, so I had to use all the skills I’ve learned,”