I’ll keep it to myself. It’s my own, personal opinion – De Kock refuses on taking the knee 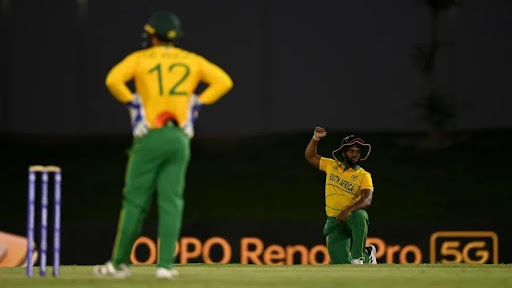 Quinton de Kock refused to play South Africa’s match against West Indies at Dubai on Tuesday following CSA’s unanimously agreed directive for all the players to take the knee before all the matches as part of the BLM movement.

The Board has taken the decision of Monday night and announced it on Tuesday, brought tensions over the BLM movement issue since the team had released a statement in November last year in which they had given three options to show the support for social justice in kneeling, raising a fist, or standing to attention.

The South African left-hander, Quinton de Kock had been a notable exception who stood casually with his hands slung casually behind his back while the others were adopting gestures.

In the online press conference on June 12 this year, during South Africa’s Test series against West Indies at St Lucia, the 28-year-old refused to explain the reason.

“My reason? I’ll keep it to myself. It’s my own, personal opinion. It’s everyone’s decision; no one’s forced to do anything, not in life. That’s the way I see things.”

In the release, South African Cricket Board members disagreed with the action of de Kock.

“Concerns were raised that the different postures taken by team members in support of the BLM [Black Lives Matter] initiative created an unintended perception of disparity or lack of support for the initiative.

“After considering all relevant issues, including the position of the players, the Board felt that the team needed to be seen taking a united and consistent stand against racism, especially given South Africa’s history.

“Several other teams at the World Cup have adopted a consistent stance against the issue, and the Board felt it is time for all SA players to do the same.”

The team’s media manager said that the players had been informed about CSA’s decision five hours before the start of Tuesday’s game.

Read full article: Ben Stokes all set to comeback for the Ashes

Asked whether the decision was taken by CSA, the manager said that she had been asked to hand over the matter to CSA’s communications head.

Words from the dressing room were that de Kock had made himself unavailable due to personal reasons.

A second release from CSA on Tuesday had clearly mentioned that all players are expected to follow this initiative for the remaining matches of the World Cup.

“The board will await a further report from team management before deciding on the next steps. All players are expected to follow this directive for the remaining games of the World Cup.”

Heinrich Klaasen, who replaced de Kock behind the stumps on Tuesday had previously stood but he kneeled on Tuesday.

“A commitment to overcoming racism is the glue that should unite, bind and strengthen us,” the release quoted CSA board chair Lawson Naidoo as saying.

“Race should not be manipulated to amplify our weaknesses. Diversity can and should find expression in many facets of our daily lives, but not when it comes to taking a stand against racism.”

Black and brown South Africans were subjugated under racist actions and legislation from the arrival of European colonizers in 1652 until apartheid was defeated at the ballot box in 1994. But racial inequality – which is experienced in social and economic terms – remains rife in the country.

Cricket itself is reckoning with the sins of its recent past at the hearings of the Social Justice and Nation-Building project, which is investigating claims of racist treatment suffered by black and brown people in the game in the past 30 years.