Indian legend, Sachin Tendulkar exposes the recipe of Muhammad Siraj on day 1 at the Gabba 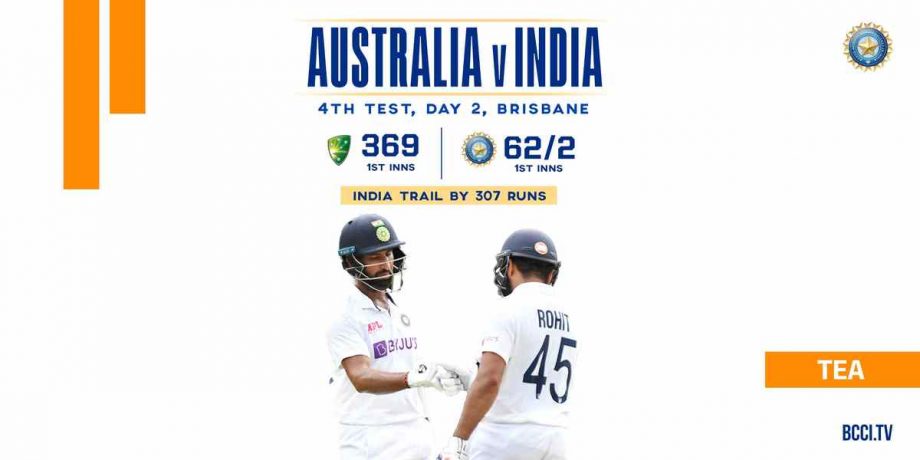 Rohit Sharma played a non-professional shot on day 2 of 4th Test at Brisbane to put India under-pressure on 62-2. Earlier, the rookie attack restricted India to 369 in the first innings. The rain fell hard in the last session to abandon the match for day 2 and Tendulkar reveals the recipe of Muhammad Siraj.

Rohit Sharma played a lousy shot before tea to put India on backfoot after 62-2, the rookie attack earlier today restricted Australia to 369 after the rain abandoned the play for day 2 in the last session on Saturday.

Rohit Sharma 44 (74) was playing well enough but then suddenly he gave his wicket to Nathan Lyon in a plate, played a lousy shot in the air that went straight into the hands of Mitchell Starc.

Earlier in the innings, India lost Shubman Gill on 7 after his nick on the slip to Steve Smith off Pat Cummins.

Cheteshwar Pujara (8) and Ajinkiya Rahane (2) scored only 2 runs in 6.1 overs before the break.

Rohit Sharma hit six boundaries in his short innings but he was never off the track as he played the testing spells of Pat Cummins and Josh Hazlewood brilliantly in such overcast conditions. The shot of the session came in the same over after a streaky boundary went through the slips to Pat Cummins.

There wasn’t much swing on day 2 but it certainly increased the pace as compared to day 1, which made the Australian bowling attack a terrible shape as they bowled with an average speed 6-7 kph more than the Indian pacers.

There is no doubt in saying that Rohit Sharma was batting most comfortably as compared to other top-order batsmen until he got dismissed off Nathan Lyon with a lofted shot straight into the hands of Mitchell Starc.

In the early session, Indian bowlers put a great effort to take the remaining five wickets for just 95 runs. Shardul Thakur along with debutants Washington Sundar and Thangarasu Natarajan picked up three wickets each and important breakthroughs on day 2 while Mohammed Siraj picked up an only single wicket on day 1.

Meanwhile, the cricket guru, Sachin Tendulkar analyzed that it was not the pitch but the ability of Muhammed Siraj to bring the bowl in on day 1 at the Gabba.

Siraj picked up one wicket on day 1 but he bowled all the spells quite impressively with inswinging deliveries. He dismissed David Warner in the very first over to prove that he can certainly fulfil the attack in the absence of Jasprit Bumrah who wasn’t ready to play the game.

“When Mohammed Siraj was bowling, I had a couple of guys say that the ball hit the crack and it nipped back something which I observed was completely different. Mohammed Siraj, when he was bowling outswingers, (reflecting on the shiny surface of the ball) this is the shiny side and what he would do is he would get his fingers behind the ball and release it,”

“So the seam is pointing towards the first slip, or sometimes second slip, and when he wanted to bowl in the cutter which moves off the seam, instead of going behind the ball he went off the pitch. So I don’t think it happened off the crack. It was Siraj’s talent. His ability to bowl those in-cutters,”