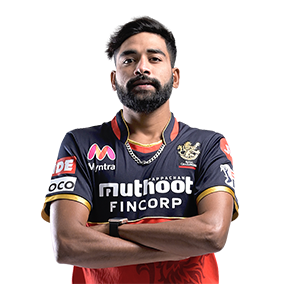 Mohammed Siraj is the son of an auto-rickshaw driver, and his childhood was full of hardships due to the poor financial situation. The 26-year old player neither went to any cricket academy, nor he had a coach. HE used to play street cricket with a tennis ball and often bunked class to play the game.

In 2015, Siraj’s friend invited him to the nets of Charminar Cricket Club, where he impressed everyone by taking five wickets in a match. His hard work paid off when he secured his place in the state’s U-23 side. The amazing performance in Ranji Trophy attracted the IPL selectors, and Sunrisers Hyderabad bought the right-arm fast-medium bowler for a whopping amount of Rs. 2.6 crores. In the 2017 season of the Indian Premier League, he picked ten wickets with the best performance of 4/32.

In the next year IPL auction, the player was picked by Virat Kohli led Royal Challengers Bangalore for Rs. 2.20 crores. He played 11 matches in that season and took 11 wickets. However, the 2019 season was not a good season for the young player, but RCB is expecting a great performance from Siraj.

His family’s financial condition was not well as his father used to drive an auto-rickshaw in Hyderabad. Mohammed Siraj started playing cricket as a batsman but later got perfection in bowling. His elder brother pushed him to pursue his dream of playing cricket.