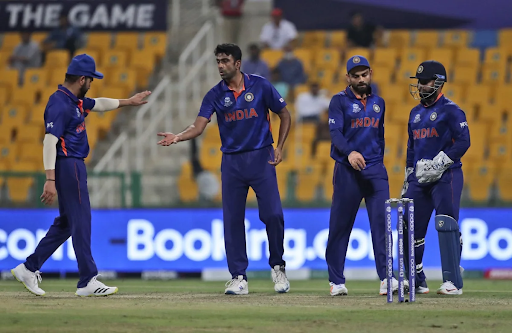 After two crushing defeats in the ICC T20 World Cup 2021, the Indian cricket team bounced back to thrash Afghanistan by a huge margin of 66 runs in their third game of the tournament to record their first victory, in Abu Dhabi on Wednesday night. The Indian batsmen finally came good in this World Cup after recording two ordinary innings with the bat to post the biggest total of the tournament so far — 210/2 in 20 overs — and in the reply, Afghanistan could manage only 144/7 chasing 211 for victory.

India are virtually knocked out from the race for the ICC T20 World Cup 2021 semifinals round and they are required to win all their remaining matches by huge margins to keep improving their Net Run Rate (NRR), since they will not be able to attain the maximum number of points which other teams such as New Zealand and Afghanistan can. However, a defeat each for New Zealand and Afghanistan may brighten India’s chances of making it to the final four, which looked bleak after their 8-wicket defeat against New Zealand last week.

India’s batsmen had struggled against both Pakistan and New Zealand in their first couple of matches of this tournament, but they bounced back in a spectacular manner on Wednesday night against Afghanistan. The Indian opening pair of KL Rahul and Rohit Sharma added 140 runs for the first wicket, which was the fourth such association in excess of hundred runs. Rahul was the second highest run getter in the innings for India as he made 69 from 48 balls with the help of six boundaries and two sixes, whereas Rohit Sharma scored 74 from 47 balls with eight fours and three sixes.

India once again juggled their batting line-up as captain Virat Kohli did not get to bat against Afghanistan at all. India promoted their wicket-keeper batsman Rishabh Pant who did not disappoint this time, scoring 27 not out from only 13 balls with three sixes and one boundary, in the company of all-rounder Hardik Pandya, who was back in his usual elements. Pandya made an unbeaten 35 from only 13 balls with four boundaries and two sixes to push India’s total 210/2 in their 20 overs.

Afghanistan were never going to find the chase easy and their job was made difficult by the Indian pace bowlers Mohammed Shami and Jasprit Bumrah. While Shami accounted for the dangerous wicket-keeper batsman Mohammad Shahzad who scored a four-ball duck, Bumrah got rid of the dangerous Hazratullah Zazai for a 15-ball 13.

Plenty of Afghanistan batsmen got starts but they failed to convert their innings, with only their captain Mohammad Nabi scoring 35 from 32 balls and fast bowler Karim Janat, who can also be a handy batsman lower down the order, notching up the highest score in the innings for Afghanistan. Janat faced 22 balls to make 42 not out with the help of three boundaries and two sixes but could not prevent a big defeat for his side.