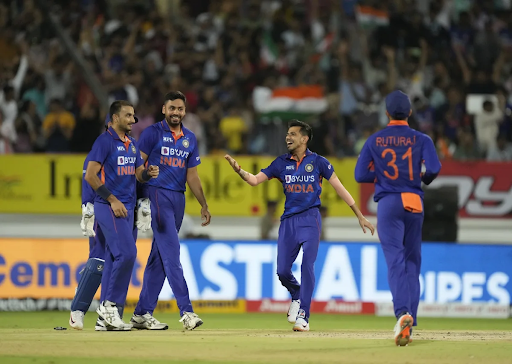 Dinesh Karthik scored his maiden half-century in the format, Hardik Pandya made 46 and Avesh Khan took a 4-wicket haul to power India to a massive victory by 82 runs which helped them level their ongoing five match series against South Africa 2-2 at the Saurashtra cricket Stadium in Rajkot on Friday night.

After scoring 169/6 with South Africa once again inviting India to bat first, the home team produced an incredible show with the ball to bowl South Africa out for just 87 with Harshal Patel, Yuzvendra Chahal and Akshar Patel being the other wicket takers.

The hero of India’s victory on Friday night was without any doubt Dinesh Karthik, who not only scored his maiden half-century in the format but also vindicated the Indian selectors who picked him for the series.

Dinesh Karthik was also involved in a crucial partnership for the fifth wicket with Hardik Pandya, which proved to be a match-winning stand as far as the home team’s perspective is concerned.

Hardik Pandya was unfortunate to have missed out on a deserving half-century as he was dismissed for 46 from 31 balls with 3 sixes and as many boundaries. But Dinesh Karthik was meant to have his on Friday night, with the wicket-keeper batsmen scoring 55 from 27 balls with nine boundaries and two sixes.

Dinesh Karthik and Hardik Pandya were involved in a crucial 65 run stand for the fifth wicket which also happened to be the best partnership from either team in the contest. The two batsmen consolidated for India and gave them a match-winning total — something that was not possible the kind of start the Indian top order made to the contest.

There was also a lot of criticism in store for the stand-in India captain Rishabh Pant, who continued to flop with the bat, chasing one way outside the off stump to the caught for 17.

South Africa could never really find any momentum or rhythm during their chase as Avesh Khan kept taking wickets regularly. The right-arm India fast bowler accounted for the likes of Dwayne Pretorius, Rassie van der Dussen, Marco Jansen and Keshav Maharaj to complete an incredible spell that gave him his best bowling figures in the format.

India’s T20 specialist bowler Harshal Patel was spot on, returning with figures of 2-0-3-1 whereas leg-spinner Yuzvendra Chahal strangulated the South African batsmen from his end, returning with 4-0-21-2.

Earlier in the five match series, South Africa had taken a handsome lead of 2-0 by winning the first two matches comprehensively. But India bounced back in the third match to defeat South Africa by a big margin, something that we were able to better in the fourth match.

The fifth and final game of the series will be played at the M Chinnaswamy Stadium in Bangalore on Sunday.