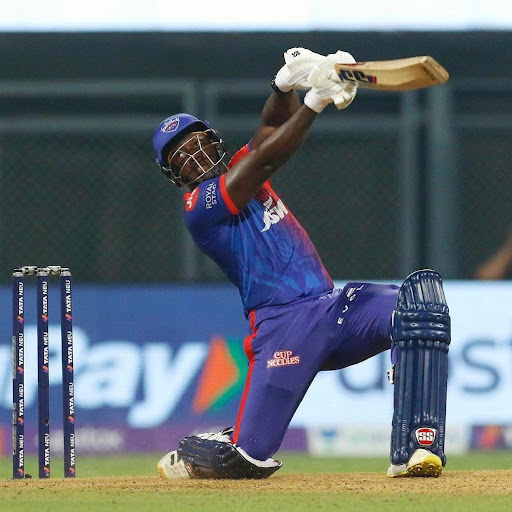 Powell who has been facing difficulty after scoring only 31 runs in his first five innings, raised a lot of questions for the Delhi Capitals

Delhi’s wait to get benefit from the power-hitting abilities of Rovman Powell has finally paid off on Thursday at the Wankhede Stadium against Kolkata Knight Riders in the Indian Premier League 2022.

Although, he tried to pull off a nearly impossible task in his previous outing against Rajasthan Royals it was against Kolkata Knight Riders when he managed to show why there was so much faith put in him by DC as a finisher.

Delhi’s wait to get benefit from the power-hitting abilities of Rovman Powell has finally paid off on Thursday at the Wankhede Stadium against Kolkata Knight Riders in the Indian Premier League 2022.

In the first half of the campaign, Powell’s return was not much inspiring for the already injury-hit Delhi Capitals. Right after they got their full strength back in the batting department, there was a little twist while chasing 146.

Powell came at a crucial position when Delhi had lost both David Warner and Lalit Yadav in the space of just 9 balls. Things started to get worse when Rishabh Pant nicked behind the stumps off Umesh Yadav .

Delhi was struggling at 84/5 as the chase rapidly went unraveling.

However, the calm presence of Powell at the crease gives hope to the DC dugout. He was on 8 off 9 balls without hitting a boundary and allowed Axar Patel to go for the attack as the dominant partner.

“It was a simple situation that require you to play singles early. Once you get the singles early, the boundary balls will always come. It was not that difficult of a situation. I played it well,”

recalled Powell after the game in a press conference.

His last seven balls hit three sixes and a four to score 25 and get his side across the line with an over to spare.

“They bowled their best bowlers early trying to get us out. Once we didn’t get out, you know that in the back end some makeshift bowlers will come and bowl…”

said Powell who hit a six apiece against Venkatesh Iyer and Shreyas Iyer at the back end of the game.

His 33 in the crucial situation stated his worth to the side. His previous score was 31 which came out from the five outings, raising questions about his ability.

“Yeah, it was a tough start, but I was in form. In the early part of the season, I was going out for like one ball, two balls, and those kinds of stuff. When you get those innings, they don’t state whether you’re a good player or bad player,”

stated Powell while also recalling the feeling within the group.

“The team – the captain, coach – rallied around me, and told me that I’ll play all the games.’So just relax, to play cricket and to enjoy it’.

“My start in the competition wasn’t the best, but I trust all the work I had done before the IPL.”

DC skipper Rishabh Pant also admitted that they were looking for this knock from Powell at the end of the innings so they can use him as a finisher more often than sometimes. In the last two games, Powell seems to be right on the task straightforward.

“The conversations were pretty simple. In the last game – 36 off  6 was always going to be difficult, just that I carried it a little close. We put that behind us and come today and try to get things right from a bowling perspective. And then whatever KKR made to try our best to chase it down. Because we know we need to get wins on the board and over time climb in the rankings.”

At the halfway mark for DC, they have found their missing pieces of the puzzle joined together.

“It’s just for us to take all the stuff that we did right and channel it to greater success. It is important just to find a few wins and find consecutive wins. It’s the middle of the competitions – 4 wins, 4 losses so everything is basically in our hands.”