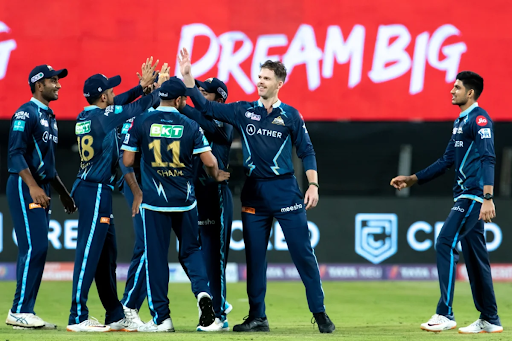 Gujarat Titans batted first and finished at 171/6 with their talented and India international Shubman Gill scoring a fluent 84 from 46 balls with 6 boundaries and 4 sixes. In reply, Delhi Capitals worked hard with the bat but could not find enough to get the better of Gujarat Titans, one of the two new IPL teams this year.

After Delhi Capitals won the toss and elected to field, Gujarat Titans lost their wicketkeeper-batsman Matthew Wade on the third ball of their innings but they bounced back impressively. The Gujarat all-rounder Vijay Shankar made 13 from 20 balls whereas their captain Hardik Pandya contributed with the bat once again, scoring 31 from 27 balls with the help of 4 boundaries.

South African batsman David Miller remained unbeaten on 20 but the others around him failed to impress, with Gujarat Titans finishing at 171/6 from their 20 overs.

For Delhi Capitals, the Bangladesh fast bowler Mustafizur Rahman was the best in terms of performance, taking 3/23 from his 4 overs. The left-arm India seamer Khaleel Ahmed was also impressive taking 2/34 from his 4 over.

In their reply, Delhi lost their opening batsman Tim Seifert early on and failed to attend any sort of momentum.

Prithvi Shaw had a troublesome stay in the middle, as he could manage only 10 from 7 balls where are the No 3 batsman Mandeep Singh could not convert his start into a big score. The right-handed Delhi No 3 batsman made 18 from 16 balls, hitting 4 fours in the process.

Delhi Capitals’ captain Rishabh Pant tried to take the game deep, scoring 43 from 29 balls with 7 fours but he kept running out of partners. All-rounder Lalit Yadav, the hero of Delhi Capitals’ win over Mumbai Indians a few days ago, could only manage 25 from 22 balls whereas Rovman Powell made 20 from 12 balls with 2 fours and 1 six.

Delhi eventually finished at 157/9 in their 20 overs, with the right-arm Kiwi fast bowler Ferguson returning with figures of 4-0-28-4. Among the other bowlers, Mohammad Shami took 2/30 whereas Hardik Pandya and Rashid Khan bowl claimed one wicket apiece.