England handed India a humiliating defeat by 10 wickets in the second semi-final to reach the summit clash of the ICC T20 World Cup 2022 on Thursday, recording a massive one-sided victory against a strong outfit at the Adelaide Oval. England will face Pakistan in the final of the tournament to be played at the Melbourne Cricket Ground (MCG) on Sunday, November 13.

In what turned out to be a one-sided contest, England outplayed, outclassed, outmatched as well as out-thought India in a knockout match once again, with the powerful Indian cricket team suffering a humiliating defeat by 10 wickets.

The defeat on Thursday brought back memories of their thrashing at the hands of Pakistan in the tournament opener last year in the T20 World Cup in the UAE, which was by similar margins and with the Indian bowlers looking totally listless.

Knowing that India would be more comfortable chasing, England captain Jos Buttler decided to field after winning the toss and his bowlers delivered the goods, led by legspinner Adil Rashid and well-supported by the likes of Chris Jordan and Liam Livingston.

The right arm legspinner Adil Rashid bowled a measly spell of 4-0-20-1 while Chris Jordan took 3 wickets for 43 runs in 4 overs to help England restrict India to a competitive total of 168/6, which was bolstered by a brilliant 63 by Hardik Pandya.

The Indian batsmen began meekly in a must win contest, showing no intent or application against the English bowlers, who gave them no room to free up their arms and get away with a brisk start. KL Rahul got a boundary off a top edge but his innings ended soon in the second over, when Chris Woakes had him caught behind for a 5-ball 5.

India captain Rohit Sharma, who struggled throughout this tournament for timing and rhythm, did try his best to counterattack and provide his side some momentum, but the pitch was on the slower side in the first innings which meant that he was not able to time his strokes and ended up consuming 28 balls for his 27 which included 4 boundaries.

India’s run machine Virat Kohli had to take a backseat and play the anchor role while Suryakumar Yadav looked to turn up the heat, but unfortunately, he failed this time around having done the same job immaculately in a few matches earlier in the competition.

The brilliance of Adil Rashid, who kept tossing the ball up in the air and kept beating the Indian batsmen repeatedly on pace as well as turn, had Suryakumar Yadav caught for 14 from 10 balls with one boundary and a 6 to his credit.

Virat Kohli finished with 50 from 40 balls with four boundaries and a six but it was Hardik Pandya who actually provided life to the Indian innings with a sensational 63 from 33 balls, which included 4 boundaries and 5 sixes.

Hardik Pandya was the only Indian batsmen to have made full use of the short boundaries on either side of the ground, as the longer boundaries at the Adelaide Oval do not make it possible for the batsmen to attack freely.

India finished at 168 for six in their 20 overs and it looked like they had just about enough runs to challenge the long English batting lineup.

However, their bowling and aspirations to make it to the final was blown away to the bits by the English opening pair of Jos Buttler and Alex Hales, who produced the best partnership ever for any wicket in the competition, adding 170 runs in 16 overs to hand India a heartbreaking loss.

It was the English captain Jos Buttler who took the early initiative of attacking the Indian bowlers but his opening partner Alex Hales soon got up and raced away with the match.

Jos Buttler finished at 80 not out from 49 balls with 3 sixes and 9 boundaries but it was Alex Hales who was perhaps more severe on the Indian bowlers, hammering 7 sixes and 4 boundaries to make it six not out from just 47 balls.

Indian bowlers were not only ineffective but they just could not produce any counter-attack while losing their lines very early in the defence of what looked like a defendable total at the halfway stage.

The Indians also had some embarrassing moments in the field which summed up the night, with yet another tournament favourites being thrashed mercilessly as England set up a date in the final with another one-time winners Pakistan. 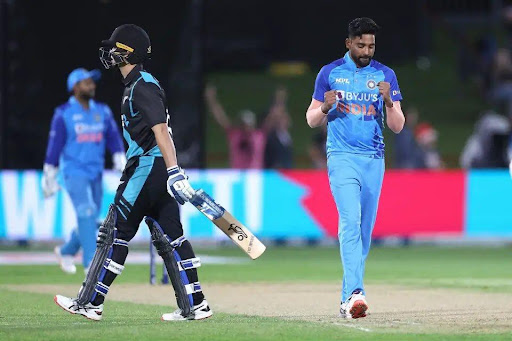