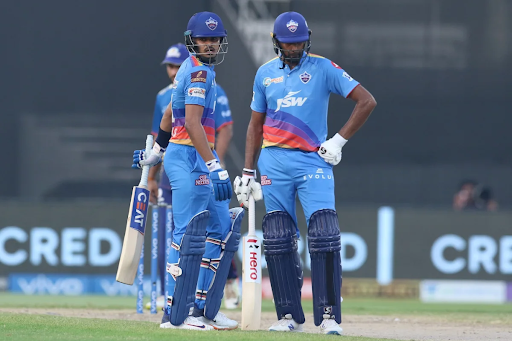 In what turned out to be a low scoring contest between the last year’s finalists of the Indian Premier League (IPL) tournament, Delhi Capitals handed Mumbai Indians a four-wicket defeat in the match number 46 played at Sharjah on Saturday afternoon.

Avesh Khan and Akshar Patel shared six wickets between them to help Delhi Capitals restrict Mumbai Indians to a poor total of 129/8 in their 20 overs, and in reply, Delhi Capitals had their own nervous moments but eventually managed to put 132/6 in 19.1 overs on the scoreboard to record a crucial victory against the defending champions.

Suryakumar Yadav did well to bounce back from a string of poor performances to score 33 from 26 balls as his innings was the only performance worth mentioning on a disappointing day for the Mumbai Indians. Rohit Sharma was dismissed for 7, Quinton De Kock made 19, Saurabh Tiwary made 15 while the all-round trio of Kieron Pollard, Hardik Pandya and Krunal Pandya scored 6, 17 and 13 not out respectively. Jayant Yadav made 11.

In their reply, Delhi Capitals made a poor start by losing Prithvi Shaw for 6, Shikhar Dhawan for 8 and Steve Smith for 9. However, a crucial partnership for the fourth wicket between Delhi Capitals captain Rishabh Pant (26) and Shreyas Iyer helped them recover from early losses and kept them in chase against Mumbai Indians.

By the end of the match, there was some drama as Akshar Patel was dismissed for nine by Trent Boult and Shimron Hetmyer was removed for 15 by Jasprit Bumrah, with Delhi Capitals still a considerable distance behind their finish line.

But Ravichandran Ashwin formed a crucial partnership with Iyer to take Delhi to a memorable victory, which they achieved in the final over of the match. Ashwin scored 20 not out from 21 balls with the help of 1 six, whereas, Iyer was unbeaten on 33 from as many deliveries with the help of 2 fours.

The defeat on Saturday afternoon pushed Mumbai Indians to the second last position in the IPL 2021 points table with only two matches left and a huge distance to cover, in order for them to make it to the IPL 2021 playoffs.