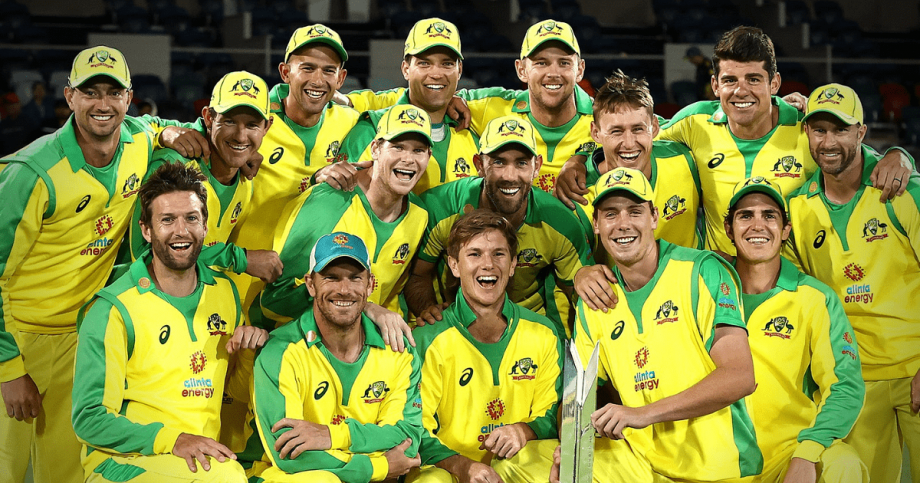 The Australian national cricket team has named their 15-member squad for the ICC World T20 2021 to be held in the United Arab Emirates and Oman.

Skipper Aaron Finch will be leading the 15-member contingent that includes multiple world-class all-rounders in Glenn Maxwell, Mitchell Marsh, Marcus Stoinis, and Ashton Agar with Dan Christian included as the backup for the tournament.

The wrist-spinner duo of Adam Zampa and Mitchell Swepson also made it to the squad with the pitches in the tournament expected to support the bowlers who can turn the ball a long distance.

Vice-captain Pat Cummins, Mitchell Starc, Josh Hazlewood, and Kane Richardson make up the fast-bowling quartet in the Kangaroos squad with Nathan Elis and Daniel Sams chosen as reserves in the squad.

The white-ball specialist opening pair of Finch and David Warner will be reunited after a while for the Australian team. Former skipper Steve Smith will also be on the plane alongside the wicket-keeper duo of Matthew Wade and Josh Inglis.

Wicket-keeper batsman Alex Carey was omitted from the touring party for the major tournament to make space for the uncapped Inglis who impressed in the Big Bash League. Experienced all-rounder Moises Henriques along with limited-overs specialists Andrew Tye, Ashton Turner, Jhye Richardson, and Josh Phillipe has been omitted completely from the main squad and the reserves list.

The recent 4-1 loss to Bangladesh was preceded by the 4-1 loss to West Indies in the 5-match T20I series has dampened the mood of the supporters ahead of the ICC tournament later this year.

Cricket Australia chief of selectors George Bailey has backed the Australian side to challenge for the trophy despite the team’s recent failures in West Indies and Bangladesh.

“We are confident this squad has the ability to take the side deep into what will be an extremely competitive tournament. We have some of the best players in the world in their respective roles combined with the collective experience to succeed against the very best T20 sides in the world.”