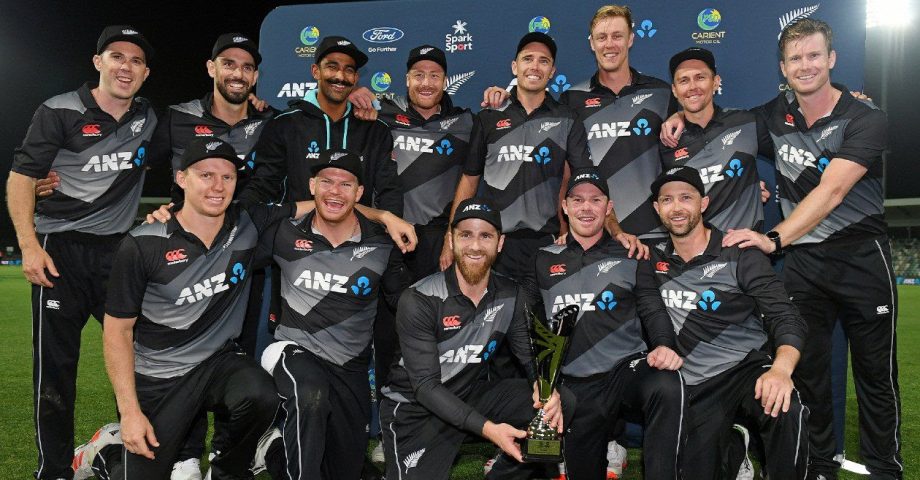 The New Zealand national cricket team has named their 15-member squad for the ICC World T20 2021 to be held in the United Arab Emirates and Oman.

Skipper Kane Williamson will be leading the 15-man party that includes multiple world-class fast bowlers in the experienced duo of Tim Southee and Trent Boult alongside the young duo of Kyle Jamieson and Lockie Ferguson. Fast bowler Adam Milne has been included as the backup for the tournament.

The spin trio of Ish Sodhi, Mitchell Santner, and Todd Astle also make it to the squad with the pitches in the middle east expected to support the bowlers who can turn the ball a long distance.

Daryl Mitchell, Jimmy Neesham, and Mark Chapman have been included as the all-rounders with Colin de Grandhomme left out of the Black Caps squad.

The opening pair of Martin Guptill and Devon Conway will also be on the plane with the wicket-keeper duo of Tim Seifert and Glenn Phillips.

T20 specialist batsman Colin Munro and experienced middle-order batsman Ross Taylor have been omitted completely from the touring party as both players failed to make it to the squad for the upcoming Bangladesh tour, Pakistan tour, 3 T20I series against India, and the ICC World T20. The duo has played a combined total of 167 T20Is scoring a total of 3633 runs across those matches and the lack of international experience could hurt the Kiwis during the tournament.

With player and coaching staff welfare in mind, an entirely new squad has been named for the T20I series against Bangladesh which will be led by Tom Latham and includes some talented names in Finn Allen, Tom Blundell, Will Young, Ajaz Patel, and Ben Sears.

For the subsequent Pakistan tour that includes 3 ODIs and 3 T20Is, the Kiwis have named a similar squad with Astle, Chapman, Guptill, Sodhi, and Matt Henry joining the players who played the Bangladesh series.

New Zealand Cricket chief executive David White insisted that the Black Caps have named a strong squad for the T20I tours preceding the ICC World T20 and gave a statement of intent on the mental health of players and the coaching staff.

“The need to safeguard the well-being of our players and support staff is now very real, and we’ve endeavored to do this by carefully managing their workloads over this winter’s massive playing programme.”

“I’m satisfied we’ve selected strong squads for all our touring commitments this winter. As the Black Caps proved in England earlier this year, we have good depth in the New Zealand game and I’m confident all the squads chosen will acquit themselves well.”