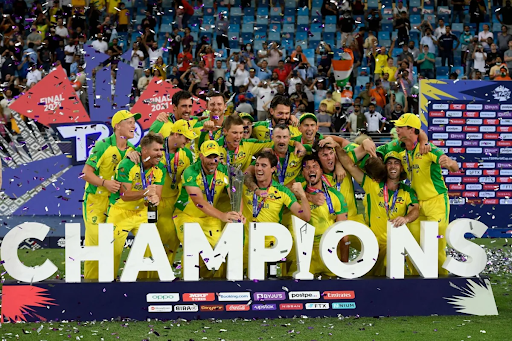 Australia added a record sixth World Cup trophy in limited-overs cricket to their cabinet on Sunday night when they thrashed their Trans-Tasman rivals New Zealand in the final of the ICC T20 World Cup 2021, and won their maiden competition in the shortest format of cricket.

In what turned out to be a one-sided contest, Australia hammered New Zealand in a high-scoring contest played at the Dubai International Cricket Ground on Sunday night, scoring 173/2 in 18.5 overs in reply to the Kiwis’ total of 172/4.

All-rounder Mitchell Marsh was named the player of the match for his unbeaten 77 from 50 balls whereas aggressive opening batsman David Warner smacked a 38 ball 53 — studded with four boundaries and three sixes — to shut New Zealand out of the contest even though the Kiwis had fought incredibly hard with the bat.

New Zealand captain Kane Williamson had earlier recorded the fastest half-century by any batsman in a T20 World Cup final when he scored 85 from only 48 balls with 10 boundaries and three sixes to provide his side with much-needed runs after they made an ordinary start with the bat. However, Wlliamson’s record (32 balls) was later on bettered by Marsh, who scored his fifty in 31 balls.

The toss had a major role to play in the outcome of the game since teams batting second have found winning matches easier in this World Cup. The story was no different on Sunday night. Australia won the toss and invited New Zealand to bat. Josh Hazlewood produced a spectacular spell of fast bowling to return with figures of 4-0-16-3, claiming the wickets of Daryl Mitchell (11), Williamson and Glenn Phillips (18).

Australia legspinner Adam Zampa was also impressive returning with 4-0-26-1 while Pat Cummins also had similar figures but without any success. Australia pace spearhead Mitchell Starc had a forgettable game as he was hit for 60 runs from four overs, with Williamson scoring the most runs against the left-arm fast bowler.

New Zealand struggled for momentum for the majority of their innings but thanks to Williamson, they had a good score to defend. Williamson toyed with the Austrian bowling attack, smacking them around the park after was dropped by Hazlewood off Starc earlier in the game.

Williamson held the New Zealand innings together and his knock was majorly responsible for pushing the team’s total to 172/4, with the second highest contribution coming from opening batsman Martin Guptill who made 28 from 35 balls with three boundaries.

In their reply, Australia once again lost their captain Aaron Finch for cheap but the pair of Marsh and Warner shut out New Zealand with an incredible partnership of 92 runs for the second wicket. Warner, who was named the Player of the Tournament, got his third half-century of the competition whereas Marsh, who began with a six off the first ball, ended with 77 not out from 50 balls with six boundaries and four sixes.

Trent Boult removed Warner but Glenn Maxwell and Marsh took Australia past the finish line. Maxwell hit the winning runs for Australia in the 19th over, reaching 28 not out from 18 balls with four boundaries and a six.

It was certainly disappointing for New Zealand who lost their second final in three years in an ICC tournament despite winning the summit clash of the ICC World Test Championship earlier in the year.

New Zealand will now travel to India for a three-match T20 international series followed by two Tests, Australia and England players will hop on to a chartered flight to travel Down Under and prepare for the Ashes 2021-22 starting on December 8.