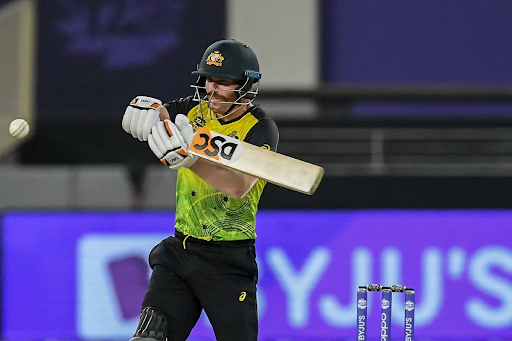 David Warner fired with the bat scoring 65 to help Australia crush Sri Lanka by 7 wickets and 3 overs to spare in their ICC T20 World Cup 2021 Group 1 match played at the Dubai international cricket stadium on Thursday night. Chasing 155 to win, Australia scored 155/3 in 17 overs with valuable contributions from the likes of Australia captain Aaron Finch (37) and Steve Smith (28 not out).

In a contest in which fortunes swung in the favour of one team to another in the first half of the game, Australia shut out the Sri Lankan side completely when they came out to chase in the second innings. It was an important game for Australia to win as they had faltered several times in the past while chasing in the shortest format of cricket, and they were the team under pressure against an unpredictable and dangerous Sri Lankan bowling attack.

But a pair of Warner and Finch did not give Sri Lanka any scope to capitalise on. While Warner scored 65 from 42 balls with the help of 10 boundaries, Finch came back among runs to make 37 from 23 balls with two sixes and five boundaries before his innings was cut short by Sri Lanka spinner Wanindu Hasaranga.

Warner and Finch added 70 runs for the first wicket to set up a strong platform for Australia to build on. The dismissal of Glenn Maxwell for a poor score of 5 from 6 balls did not deter the Australians, who found a dependable pair teaming up in the middle in the form of Warner and Steve Smith. The two former leaders of the Australian cricket team added 50 runs for the third wicket to take their side close to the finish line, with all-rounder Marcus Stoinis chipping in with vital 16 not out from 7 balls with two boundaries and one six to complete the game for his team.

For Sri Lanka, Hasaranga was the best bowler with figures of 4-0-22-2 while Shanaka took the third wicket of the Australian innings.

Earlier in the match, Sri Lanka made a positive start after they were invited to bat by Australia. The opening pair of Pathum Nissanka and Kusal Perera could not do much when the former was dismissed by Australia pacer Pat Cummins, getting him caught by Warner for 7.

However, Perera and Charith Asalanka both scored 35 each from 25 and 27 balls respectively while hitting identical numbers of four boundaries and one six each to consolidate for Sri Lanka. But just when it was looking like Sri Lanka would run away, it was Zampa who came into action in the middle overs after the batting side made a strong recovery to get rid of both the set batsmen, breaking their 63-run association, and bring Australia back into the contest.

Sri Lanka were also benefited by a strong performance with the bat from Bhanuka Rajapaksa, who hit four boundaries and one six to make 33 not out from 26 balls. With the support of other batsmen in Hasaranga (4), Dasun Shanaka (12) and Chamika Karunaratne (9*), Rajpaksa was able to take the Sri Lankan total past the 150-run mark.

While Zampa was impressive with the ball and won the man of the match award for his figures of 4-0-12-2, Cummins took 2/34 from his two overs while Mitchell Starc returned with 4-0-27-2. Josh Hazlewood was wicketless but bowled an economical spell of 4-0-26-0.