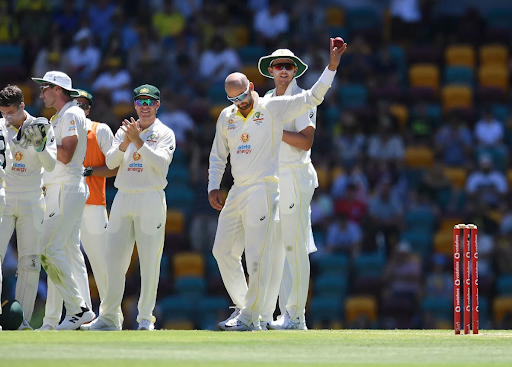 Australia came back storming on the fourth day morning of the first Ashes Test played at the Gabba in Brisbane to record a huge 9-wicket victory that helped them take 1-0 lead in the 5-match series, on Saturday in Brisbane.

Australia bowled out England for 297 and scored the 20 runs which were required for them in the second innings, at the loss of one wicket in the first session, which saw the visiting side producing yet another horrible performance with the bat. England lost 8 wickets for 77 runs after batting incredibly well on the third day, wherein their captain Joe Root and No 3 batsman Dawid Malan produced splendid performances with the bat.

Nathan Lyon became only the third Australian bowler in the history to take 400 Test wickets to join the likes of Glenn McGrath and Shane Warne. Lyon, who had to wait for a very long time to take his 400th Test wicket, returned with the figures of 34-5-91-4, accounting for the likes of Malan (82), Ollie Pope (4), Ollie Robinson (8) and Mark Wood (6) to help Australia set up an easy victory.

Earlier in the match, Australia had taken a huge lead of 278 runs in the first innings when they folded for 425 in reply to England’s small total of 147 in the first innings. The left-handed batsman Travis Head smashed the third quickest century in the history of the Ashes from only 85 balls as he scored a monumental 152 from 148 balls with 14 boundaries and 4 sixes. The other batsmen in David Warner contributed with 94 and Marnus Labuschagne made 74.

England had done very well in the second innings when Malan and Root teamed up to take their side at par with Australia on the third day. Root and Malan added 162 runs for the third wicket from 316 balls which helped England wipe the deficit but the others did not contribute to the team’s cause at all.

Stokes was dismissed by Australian captain Pat Cummins for 14, Pope was removed by Lyon for 4, wicket-keeper batsman Jos Buttler became a victim of Josh Hazlewood for 23 whereas all-rounder Chris Woakes fell to all-rounder Cameron Green for 16.

For Australia, while Lyon took four wickets in the second innings, Cummins and Green claimed 2 wickets each whereas lead fast bowlers in Mitchell Starc and Josh Hazlewood took one wicket each.

With David Warner struggling owing to a rib injury, Australia sent out Alex Carey to open along with Marcus Harris the second innings. They did well to take Australia close to the finish line but Robinson accounted for Carey and Harris finished 9 not out in the company of Labuschagne when the winning runs were scored.

Australia debutant Carey created a world record when he took eight catches in the Brisbane Test to record most dismissals by wicket-keeper on Test debut, at the Gabba.

The second Test of the Ashes 2021–22 series will be played at the Adelaide Oval from December 16 which would be a day-night affair. Meanwhile, the Bellerive Oval in Hobart will host the fifth and final Test of this year’s Ashes series.