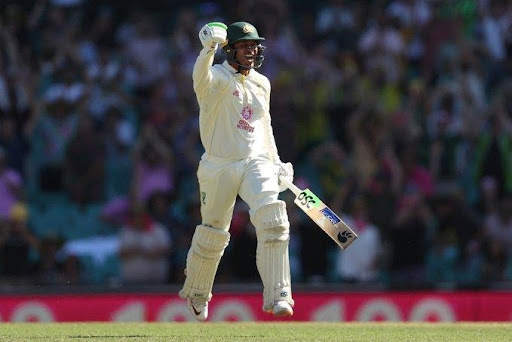 Australian comeback left-hander Usman Khawaja says that scoring two centuries in a single Test match of Ashes hasn’t sunk in yet and apart from personal achievement, he was looking more to put his team in a commanding position.

Australian comeback left-hander Usman Khawaja says that scoring two centuries in a single Test match of Ashes hasn’t sunk in yet and apart from personal achievement; he was looking more to put his team in a commanding position. On day 4 of the fourth Ashes Test, the Southpaw impressed the audience at the MCG with his brilliant 138 balls 101* and the 35-year-old believes that he doesn’t have the only intention to score centuries but to put his team in a strong position.

Khawaja said in the presser.

“I’ve always wanted to score a century in both innings in first-class cricket and never done it. I wasn’t really sure if I was gonna do it. It didn’t really matter to me, now that I’ve played so long. I’m like it’s not the end of the world. Not a big deal, but it’s just a nice tick-off and has put the team in a situation where hopefully we can try to win. Look, it all worked out pretty well. it doesn’t always happen in life and cricket. It’s special,”

He also shared a partnership stand of 179 with Cameron Green to propel the Australian innings after they got themselves in serious trouble at 86 for 4. Green came to the crease with quite some aim and he kept hitting boundaries everywhere to keep the scorecard ticking. Khawaja praised the all-rounder and said that Green helped him accelerate his innings and to get out from the early phase of the innings.

“It was awesome, he batted beautifully. Greeny scores so many runs against Queensland, I hate playing against him in Shield cricket. I was just talking to him as much as I could, just about what we’re trying to do out there. He was talking about spin and I was telling him what options I thought he should take. Just try to reassure him especially at the start. You could tell he’s a little bit nervous at the start – and just trying to reassure him of what he needs to do.”

Khawaja also praised the fact that Green has some serious potential to play the game rightly and is an important investment for the future. The all-rounder has shown his talent with the ball while bowling at a decent pace and hitting the deck harder. And with the bat, Green averages over 50 in first-class cricket.

“Cameron Green is an absolute weapon, he’s a gun of a batsman. He’s played some unbelievable innings against myself and Queensland. He just needs a bit of time. It’s not easy… Test cricket is tough work. And look, he’s batting really well this year. He scored a few hundred to start in Shield cricket.

“Look, he’s bowling beautifully and that’s just a bonus. He loves batting, and every time he goes out to bowl, when he gets wickets, it’s just a bonus for him. It’s unbelievable. It’s a bonus because he bowls 140 kilometers plus when he comes on to bowl. You don’t get players like Cameron Green very often. So I think the selectors know that and they see that.”

England needs 358 more runs to mark their first Ashes victory of the season and which is an impossible task to complete at this stage looks. Khawaja, on his team, said that the Australian bowlers need to play the final day quite patiently and ask questions to each other. He also observed a couple of cracks underneath the pitch which could cause the batters some problems.

“It’s interesting. There’s the odd spot there, which is horrible. It’s just taking off and smacking you. It’s only here and there, and you hope you can get out of the way of it or hit the gloves or something.

“It will be interesting to see how tomorrow plays out. Fingers-crossed, we get some good weather because we probably need all those 98 overs that we have. It’s going to be a bit of a grind, but I think if we can keep on that grind for long enough and just keep asking questions over and over and over again. I think we’re in with a chance. I’d be surprised if they don’t try to go for the total. And, hopefully, tomorrow can be a really good day of Test cricket.”