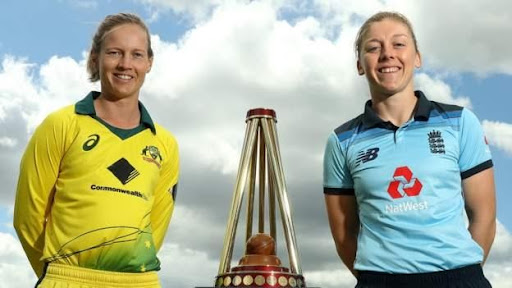 The Women’s Ashes series Scheduled has been changed because of their quarantine period ahead of the ODI World Cup in New Zealand while the tour will be finished now 11 days earlier than before schedule.

The Women Ashes series Scheduled between Australia and England have been changed now due to completing their quarantine period and preparation before the 50-over World Cup in New Zealand.

The multi-format series will now begin on January 20 with the T20 game at the Adelaide Oval. The only test game will be played from January 27 to 30 at the Manuka Oval in Canberra.

This is followed by the ODIs on February 3, 6, and 8. The opening ODI game will be played on February 3 at Manuka Oval in Canberra. Now, the tour will be finished 11 days earlier than the first scheduled.

“We are looking forward to a fantastic series between probably the two best teams in the world, with each side being current T20 and ODI world champions respectively,”

Cricket Australia has also had to factor in ‘logistical considerations’ while making the schedule, which has resulted in moving the T20Is out of Sydney.

Adelaide will be host by the three T20 matches from January 20 while the only test game and the first ODI match will be played in Canberra and the remaining two 50-over matches will be played at Melbourne’s Junction Oval, on February 6 and 8.

“Regrettably, logistical considerations have meant that we have had to move two T20 games from North Sydney Oval, which has long been the home of the women’s game in Sydney, and it is also disappointing that the annual Governor-General’s XI match scheduled to be played at Drummoyne Oval is unable to proceed this season. We thank cricket fans in Sydney for their understanding and do no doubt that the three T20Is at Adelaide Oval will set the tone for a great series.”

Australia will be announced the squad in the next week while England has revealed their squad in December.

Cricket Australia also announced the schedule for Australia and England A series schedule that will go along with Ashes at Adelaide and Canberra.

Australia A vs England A fixtures