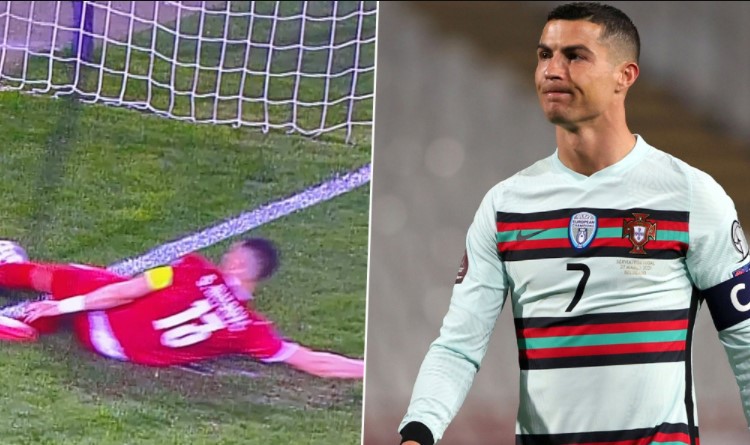 Ronaldo after the match: "We feel that the whole country is being harmed"

The Serbia-Portugal match ended with a scandal, the referees made Cristiano Ronaldo lose his temper. Everything was fine until the last minute. The game turned out to be a dramatic one: the Portuguese scored two goals in the first half, but the Serbs made a comeback in the second: they made it 2-2 in the 60th minute thanks to a very reactive counterattack.

Diogo Jota scored twice in the first half, putting Portugal 2–0 ahead in the game. Serbia equalized the scores with the help of goals from Alexander Mitrovich and Philippe Kistic.

There were no more obvious chances until the fourth extra minute.

And then it all went up in flames: Nuno Mendes saw Cristiano Ronaldo opening on the right flank and sent the ball to him almost from the center of the field. Ronaldo ran away from the defender into the penalty area, beat the goalkeeper, flicked the ball past him, and ran to celebrate the scored goal.

At that time, defender Stefan Mitrovic rushed to the goal line and cleared the ball. The replay showed that it had already crossed the line, but the referees did not notice it!

Ronaldo was furious. He pounced on the linesman, shouted something and waved his hands for a long time. The main referee showed him a yellow card and ended the game. Then Ronaldo threw away the captain’s armband, crossed his arms a few times and left the field ignoring anyone.

Ronaldo is angry at the referee, who did not see that the ball crossed the line

Such a reaction is understandable. The team could have beaten the main rival in the group, plus the last minute – the strongest emotions. In addition, Ronaldo really needed this goal to break the strange streak: he has not scored or assisted for the national team in four games.

“Being the captain of the Portugal team is the greatest honor and privilege of my life. I always give and give everything for my country, which will never change. But there are difficult times to deal with, especially when we feel A. The whole country is being harmed. Raise your head and face the next challenge now! Come on, Portugal.“

The match was officiated by a team of referees from the Netherlands, headed by Danny Makkelie. There was no VAR or goal detection system at the game.

“In 2019 UEFA had proposed to FIFA the implementation of VAR in the current World Cup qualifiers. The impact of the pandemic on operational and logistical capabilities led UEFA to delay the implementation of VAR in the Europa League group phase as well as to withdraw the proposal to implement VAR in the 2022 European qualifiers. VAR was also not in use in the UEFA Nations League group stage in the autumn of 2020 and has therefore to-date never been used in UEFA national team qualifying group stage matches.”

That explanation is not satisfactory for Portugal, which is level on four points with Serbia in Group A rather than being ahead.

The Dutch referee has recently spoken to one major sports media and admitted his serious mistake.

“In accordance with FIFA’s policies, the only thing I can say is that I had to apologize to the national coach, Mr. Fernando Santos, and to the Portuguese national team for what happened. As a refereeing crew, we always work hard to make good decisions. When we are in the news like this, it does not make us happy at all,”

Fernando Santos has already confirmed right after the clash that the Dutch referee regretted his mistake:

“The referee apologized to me and told me he was ashamed. I was in the dressing room with him and he apologized. He had told me on the field that he was going to look at the images and that if it was the case he would call me to apologize…and he did”.