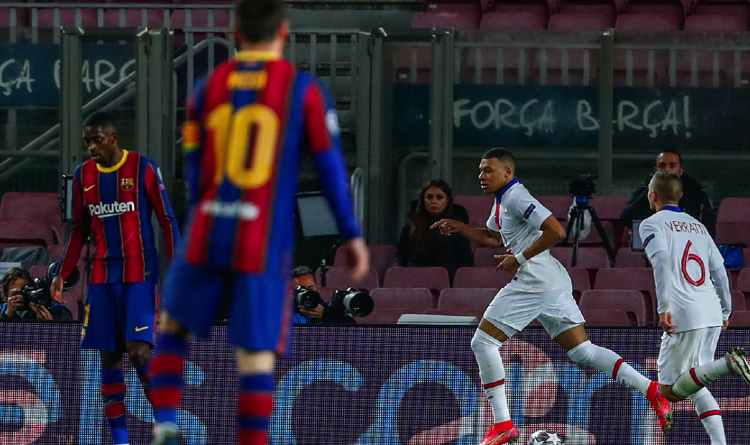 Yesterday, the Parisians delivered a very solid collective performance that allowed them to win (4-1) in the bowels of Camp Nou, a first for a French club in the UEFA Champions League.

In the first leg of the Champions League 1/8 final, Kylian Mbappe netted a hat-trick against Barcelona to prove his top-flight status at the highest level.

His first goal, a riffled shot into the roof of the net, had canceled out Lionel Messi’s earlier penalty and the youngster added a second after half-time as Barcelona cleared an attempted cross into his path. Moise Kean headed in a third for the Parisians before Mbappe completed his hat trick by finishing off a quick counterattack in the closing stages.

The return leg takes place on March 10, by that time Neymar and Di Maria are expected to be back, making Paris even stronger or, maybe, it will break the balance in an already well-functioning mechanism. So far, the French club looked very solid and this squad is one of the main contenders for the trophy at the moment.

Mauricio Pochettino reveals what Kylian Mbappe said to him in training this week:

Guillermo Amor, Barça’s director of sports and institutional relations, congratulated PSG on their big win at the Camp Nou. On Mbappé’s display, he said:

“We have to recognize that Mbappé is a great player. A good, young player with a very important future ahead of him. I hadn’t seen him live too much and the truth is that he is a great player”.

Asked about Messi’s performance, he commented that

“It’s true that there are players who can decide games and change results, but this is a teamplay game and they were better. Their midfield was controlling the game tempo all the time”.

Regarding the future of the Argentine, he clarified that there were no talks about it with the PSG directors:

“There has been no conversation about Messi, we were focused on the game”.

Interesting fact: Russian UFC fighter Khabib Nurmagomedov attended the match. After the game, he shared a picture of the shirt that Mbappe had gifted him.