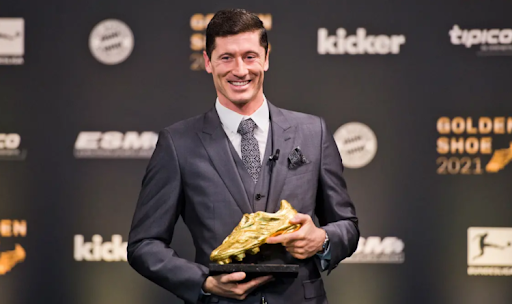 Robert with the Golden Shoe award

The Polish national team player scored a sensational 41 goals in 29 Bundesliga games last season and won the European Top Scorer Award for the first time in his career.

The 33-year-old striker managed to break the record set by legendary Gerd Müller for most goals scored in a single campaign in Germany’s top flight. Back then, in the 1971-72 season, the German scored 40 goals. Moreover, the player managed to beat former Barcelona superstar Lionel Messi by 11 points.

The moment of awarding:

“I would like to thank my family, teammates, coaches and the entire FC Bayern team. Winning the title would not be possible without your support. In sport, just like in life, what matters is respect for others, collaboration and fair play no matter what you do. I would like to dedicate this award to all of you who have been by my side. I am extremely proud of what we have achieved together as a team. Thank you!”

Don`t miss out 💥: Ronald Koeman to be fired from FC Barcelona? Revealing how much it will cost