Did Messi’s contract bring Barcelona to the verge of bankruptcy? Revealing details 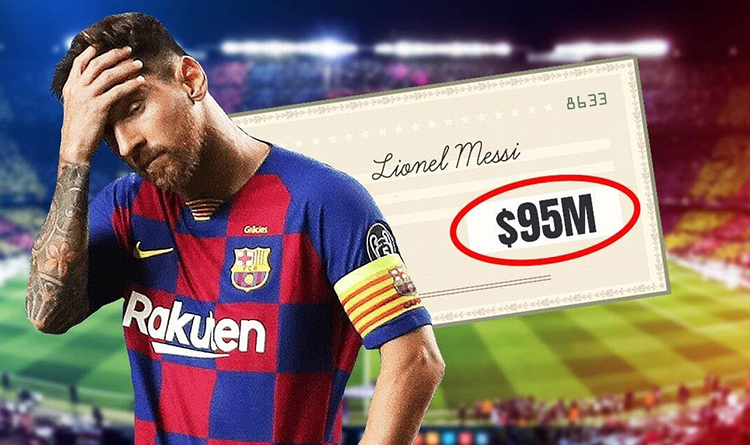 Lionel Messi and his huge paycheck

Details of Messi’s contract revealed: more than half a billion over 4 years, signing bonus – €115 million, loyalty fee – €78 million. Who could leak such details?

The Spanish newspaper published a piece revealing the details of the Argentine’s current contract, which was agreed in November 2017. It is unknown where the newspaper got this information from, but journalists stated that they got the precise copy of the contract. The fact is that Barcelona is experiencing difficult times and this information can cause unpredictable reactions.

Don`t miss out 💥: FC Barcelona is on the verge of bankruptcy, it became known that players do not receive their salaries.

Here’s how the contract of one of the most popular players on the planet at the moment looks like:

Five months before expiration, Messi has already earned €511,540,545 on his contract. The contract includes a bonus of €1,168,964 for participation in 60% of matches during the season. Played game is considered a match in which Leo spent 45 minutes, while for other players – 60 minutes.

As a result, Leo received an average of 138 million per season, including bonuses (we are talking about payments before taxes).

Another bonus in the contract – Messi is entitled to get €66,249,462 as a severance bonus after parting. Similar clauses were in the contracts of Xavi and Iniesta, but with much smaller amounts.

And also note: Messi had the right to terminate the agreement unilaterally if Catalonia gained independence.

Messi’s inner circle is convinced that the publication in the magazine is the machinations of the former president. It is became known that the lawyers will sue the newspaper, as well as Bartomeu, a man from his entourage, Oscar Grau, and two other people who had access to the details of the contract.

He responded by saying that he had no relation to the leak:

“It is totally false that I leaked this contract. It is a very serious matter, it is illegal to leak professional contracts, talking on television and accusing is easy but we are not for jokes, this will end up in court.”

“Messi deserves what he earns both on a sporting and commercial level. Without pandemic, Barça could perfectly pay these figures,”

Barça also responded with an official statement denying the relation to the publication of the document:

“FC Barcelona expresses its absolute support for Lionel Messi, especially in the face of any attempt to discredit his image, and to damage his relationship with the entity where he has worked to become the best player in the world and in football history,”

Barcelona spends a colossal 85% of its budget on salaries, while the European Association of Clubs recommends no more than 70%.  The pandemic, of course, has affected everyone, but it has hit Barcelona especially hard, since their city is an important destination for tourists who flock to the stadium and its VIP loggias, to the club museum and to the official store.

The club was not prepared for this. They spent the €222 million they received for Neymar on Coutinho (€165 million) and Dembele (€145 million), assigning them the same crazy salaries as Messi. This led their teammates to knock on the president’s door to ask for a raise. By the time the coronavirus came and stopped everything, Barça’s expenses had only increased dramatically.