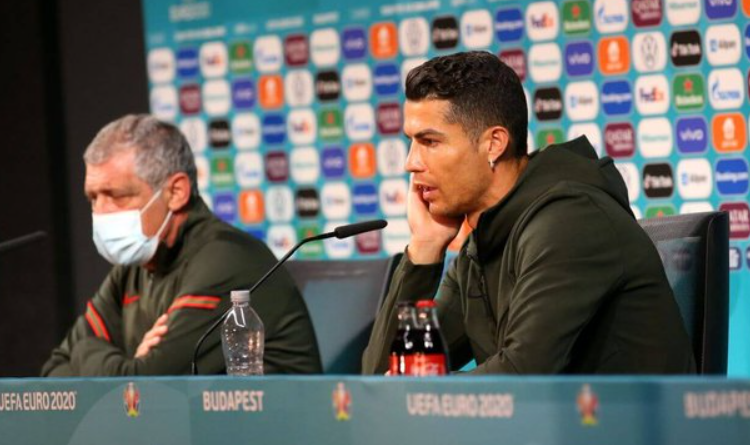 We all know Ronaldo is a professional who always takes care of his body, he is extremely against sugar and soft drinks

In the video, the Portuguese player disdainfully pronounces the brand name.

The company’s share price plunged 1.6 % on the stock exchange 30 minutes after Ronaldo’s rejection of Coke. Coca-Cola has fallen from $242bn to $238bn with a total loss of $4bn.

Ronaldo has a strict diet – absolutely no sugar intake.

“A healthy diet is the basis for playing football, if you don’t use the right fuel you can’t be 100% ready. The main thing is to take care of your body, train and eat right.”

said Zinedine Zidane, back when he was still on Ancelotti’s staff.

In 2018, Сhristiano revealed that his biological age is 23 and he will continue to play football at the highest level until he is 40.

In the photo below you can see how ‘dry’ his body is, the diet is definitely paying off – zero visible fat.

Ronaldo has never advertised sweet drinks. There were ads for shampoo, a wristwatch and even a Russian bank. He actively promotes sports nutrition and as a matter of principle does not sign contracts with soda manufacturers, for example.

The rules apply not only to “El Bicho” himself but also to his family – in particular, he controls Cristiano Junior’s diet.

“My son has potential, let’s see if he becomes a great footballer. Sometimes I find it difficult with him because he drinks Coca-Cola and Fanta, which is bad for his body. I struggle with him eating crisps and fries and stuff – I don’t like that. I just want him to be the best at what he wants to do. I always tell him that hard work is more important than anything else. I have four children and I always wish them only the best, but when they eat chocolate – I have to stay strong in those moments.”

Ronaldo seems to have followers: