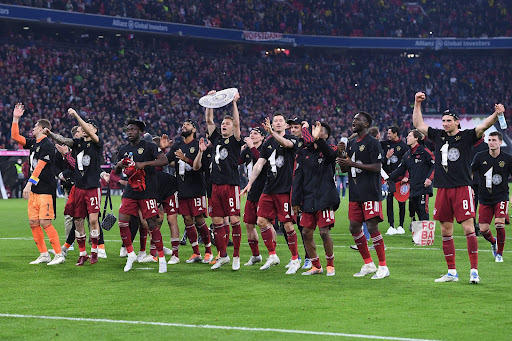 Bayern Munich has sealed yet another Bundesliga title as they defeated Borussia Dortmund 3-1 courtesy of goals from Serge Gnabry, Robert Lewandowski, and Jamal Musiala in front of a packed Allianz Arena crowd with 75,000 fans present.

The much-hyped Der Klassiker once again ended in the favor of the Munich-based club as Gnabry opened the scoring in the 15th minute with a well-struck volley from the edge of the Dortmund penalty area. The second-highest goalscorer in the club’s history, Lewandowski decided to add another to his tally with a smart finish.

Emre Can’s well-taken penalty gave the men in yellow a lifeline in the match and the title race as well but the 19-year old Musiala’s trickery and never-say-die attitude propelled Bayern to a 3-1 win and their 10th consecutive Bundesliga title.

The German giants dropped the curtain on the 2021-22 season with only Champions League spots left to be played for behind Dortmund with 62 points in 31 matches, yet again looking to finish as the ‘best of the rest’.

Bayern Leverkusen and RB Leipzig are currently occupying the 3rd and the 4th positions respectively with SC Freiburg, Union Berlin, and Koln trying to chase the duo.

On the other end of the table, Greuther Furth was relegated to the second division of German Football with two of Arminia Bielefeld, Vfb Stuttgart, and Hertha Berlin looking set to join them in 2.Bundesliga.

The Gulf in Class

Bayern Munich won their 10th consecutive Bundesliga title continuing the streak from the 2012-13 season when they snatched the title back from Jurgen Klopp’s Borussia Dortmund side.

This is the first time in the history of the Bundesliga that a team has pocketed 10 straight league titles with the second-best record of three consecutive titles achieved by Bayern themselves along with Borussia Monchengladbach.