Barcelona and Real Madrid pump four goals past their opponents  

Barcelona in action against Cadiz

Defending champions Real Madrid continue to stay atop of the 2022-23 season of La Liga with a 4-1 victory over Mallorca. Barcelona blanked Cadiz 4-0 while Atletico Madrid showed no mercy on Celta Vigo with a 4-1 win.

Girona took the lead in the 21st minute when Alvaro Garcia unleashed a cut-back pass towards Reinier who made no mistake in slotting it home. Valladolid equalized the proceedings seventeen minutes later courtesy of a scorching shot from outside the box.

Just when it seemed the match would end in a draw, Alberto Bueno nodded a cross from a free kick past the face of goal and Oriel Romeu made no mistake in heading it past the goal-line in the 88th minute.

Rayo Vallecano went into the break with a one-goal lead as Isi Palazon found the net in the 5th minute. Nico Gonzalez’s own goal in the 52nd minute doubled the home side’s lead before Mouctar Diakhaby pulled one back for Valencia but it proved to be too little too late.

Erik Lamela whizzed past the defense of Espanyol to score the first goal of the game in 45 seconds. Substitute Jose Angel Carmona struck twice before the change of ends to hand Sevilla a three-goal lead.

However, Espanyol got a lease of life when Joselu converted a penalty at the stroke of half-time. Martin Braithwaite scored one more goal for Espanyol in the 82nd minute after pouncing on a rebound but the home side was unable to complete their comeback.

After a goalless first half, Barcelona broke the deadlock in the 56th minute when Frankie de Jong capitalised on Gavi’s cut back to score a goal. After a scramble, Robert Lewandowski tucked the ball into the net in the 65th minute to double Barcelona’s goal.

Ansu Fati and Ousmane Dembele scored a goal each in the dying minutes of the game to complete Barcelona’s 4-0 routing. 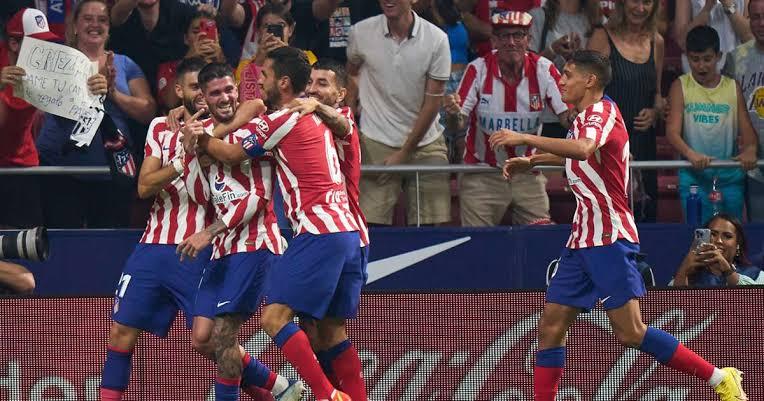 It took Atletico Madrid only nine minutes to score a goal when Angel Correa darted into the box to smash the ball home. Rodrigo de Paul’s deflected effort after half-time doubled their lead before Yannick Carrasco made the most of a deflection to put Atletico three-nil upfront.

Gabri Veiga pulled a goal back for Celta but Unai Nunez scored an own goal as Atletico won by a three-goal margin.

Vedat Muriqi provided Mallorca with the lead in the first half after nodding home Lee Kang-in’s free-kick. However, Federico Valverde equalised for Real Madrid at the stroke of half-time after dribbling through the entire Mallorca defense and slamming the ball home.

Rodrigo did the hard part of driving the ball into the box before slipping a pass towards Vinicius Jr who netted the ball in the 72nd minute to hand Real Madrid the lead.

As Mallorca pushed bodies upfront for the equaliser, Rodrygo and Antonio Rudiger scored a goal apiece after the 85th minute to dash any hopes of a comeback.

The away side momentarily lost their concentration in defense and Ezequiel Ponce bagged a consolation goal for Elche.

Enes Unal gave Getafe the lead at the stroke of half-time after Borja Mayoral was denied from the penalty spot. Carles Alena found the net from the edge of the box after the restart of play while Brais Mendez pulled one back for Getafe.

After a goalless first half, Rodri popped up with a strike to score the only goal of the contest for Real Betis. Both the clubs will pause their La Liga ambitions to focus on European action.