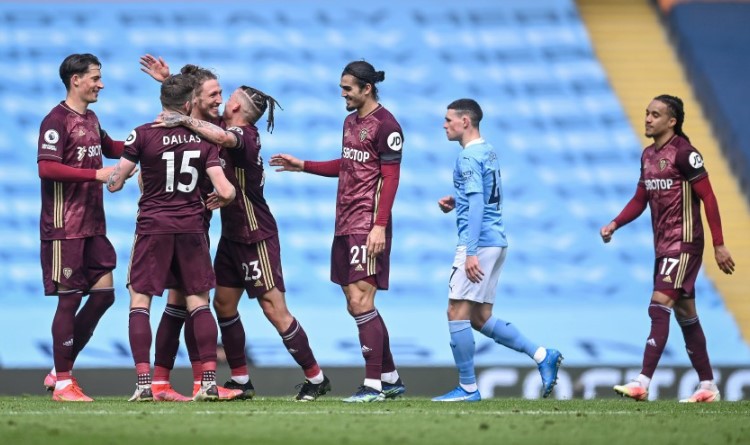 Manchester City lost 1-2 to Leeds United in round 31 of the English Premier League. This is City’s first defeat in their last seven games after they had previously won six in a row in all competitions.

Every outfield Manchester City player has attempted a shot against Leeds. Pep Guardiola’s team had 29 shots on goal, seven of them were inside the box, still, they managed to score just one goal in the match. It was an equalizer from Ferran Torres in the 76th minute.

Leeds, on the other hand, were extremely efficient, with two shots on goal converted into goals. First was an opener from Northern Ireland midfielder Stuart Dallas, his low shot surprised Ederson in the 42nd minute.

After that, Citizens were playing against a 10-man side from the 45th minute as centre-back Cooper was sent off for a rough tackle on Gabriel Jesus.

The Manchester side had huge problems with finishing, while Marcelo Bielsa’s side snatched victory: the same Stuart Dallas on fire scored in added time, he galloped clear down the middle of a vacant City defence to net a winner

“We did not create enough for the forwards. It is part of the game. In the last 10 minutes they had other chances, they are fast and can do it. When they defend in the way they were doing you have to stop them running and we did not do that.

“The value of the victory increases because it was achieved in a game where we were dominated and demanded character, effort and personality. I think we have to link the victory to the spirit of the players. The spirit of all the players added together creates a uniform effort. It’s very difficult to win games like today. I think we deserved it but the fair thing would have been for City to win it because they had the dominance and the chances. I value a lot the English refereeing and with the added factor of VAR all the decisions are justified.”

The Citizens only have to pick up 11 points from their final six games to guarantee a Premier League title.

In that case, Man City will be champions regardless of their rivals’ performance.

Manchester City are next in action in the second leg of their Champions League quarter-final against Borussia Dortmund on Wednesday, while Leeds host Liverpool at Elland Road in the Premier League on Monday.

Don`t miss out 💥: Kevin De Bruyne signed a new contract with Manchester City, he negotiated the deal without the agent`s help.