PUBG Hits the World by Storm: Biggest Competition in PUBG History “PGI.S 2021” Gets Started with a Whopping $3.5 Million Prize Pool

One of the most anticipated eSports tournaments of the year, the PUBG Global Invitational.S, or the PGI.S, has hit the floor on February 5, 2021. The eight-week long tournament will see the best PUBG teams of the world fight it out amongst themselves. KRAFTON Inc are the main organizers of the tournament. The most attractive thing about the competition, though, is its humongous prize pool, which stands at an astonishing $3.5 million, the highest ever in a PUBG tournament.

Many of the PUBG fans from all over the world have questioned the presence of an “S” in the tournament name and have asked why it has been used at all. Krafton has answered that question with aplomb in a recent press release. Firstly, they have stated that the “S” in “PGI.S “stands for the idea of “survival”, which is the centre of the whole “battle royale” gaming genre. They remarked that It also symbolizes “safety”, which we need right now more than ever. It also teases at the biggest prize pool in PUBG history (“$”), the lengthiest and longest “series”, and also their quest to find the most “supreme” team in the world of PUBG.

No less than 32 heart-throbe PUBG teams are participating in this nail-biting tournament. World-famous eSports entities are also taking part, including Team Liquid, DWG KIA, Four Angry Men, Gen.G, Soniqs, Shoot To Kill, and Faze Clan etc. There will be more competition than ever for the race to the Chicken Dinner. The PGI.S is structured complicatedly, but with excitement wrapped all around it as well, as it has an intricate online/offline format. Teams that are not being able to, or prefer not to, participate online in the tournament, have flown into the Krafton studio in Incheon, South Korea. 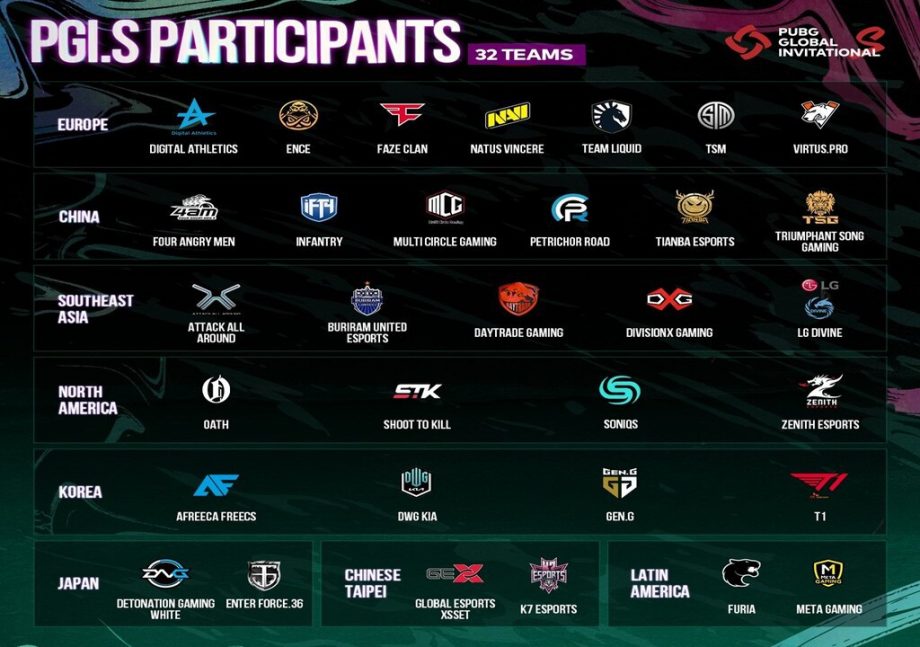 All the 32 participating teams in the PGI.S 2021 are raring to go

The PGI.S is intricately layered and will be a true test of temperament and persistence of all the teams in action. The first layer of the tournament has already been concluded. It was called the “Rank Decision” level. All the teams took part in it, and after the matches, they have been ranked according to their performances and standings.

Here’s the leaderboard after the “Rank Decision” matches: 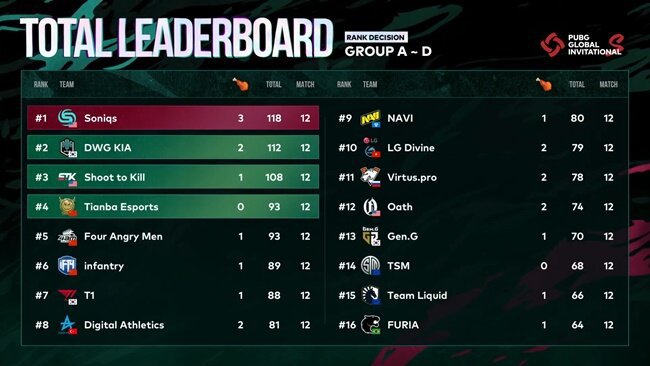 Ranks that were decided in the “Rank Decision” matches (1-16) 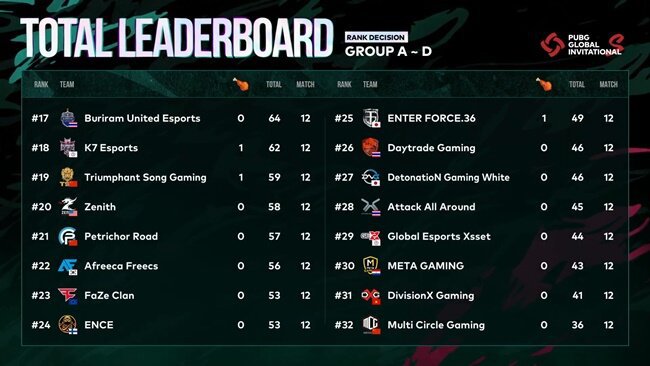 Ranks that were decided in the “Rank Decision” matches (17-32)

The top 16 rosters from that pool will now compete in the “Weekly Survival” matches. In this stage, whichever team becomes victorious and wins the all important chicken dinner, will subsequently qualify for the “Weekly Finals”. That particular team will not have to compete in the remaining portion of that week’s Weekly Survival. The team that is ranked next to them from the Rank Decision matches, will ultimately take their place, and the matches will go on. Money is not a big issue in this tournament. In the Weekly Survival matches, the prize pool will start at $10,000 in the first round and then decrease as the action goes on into the latter part of the competition. 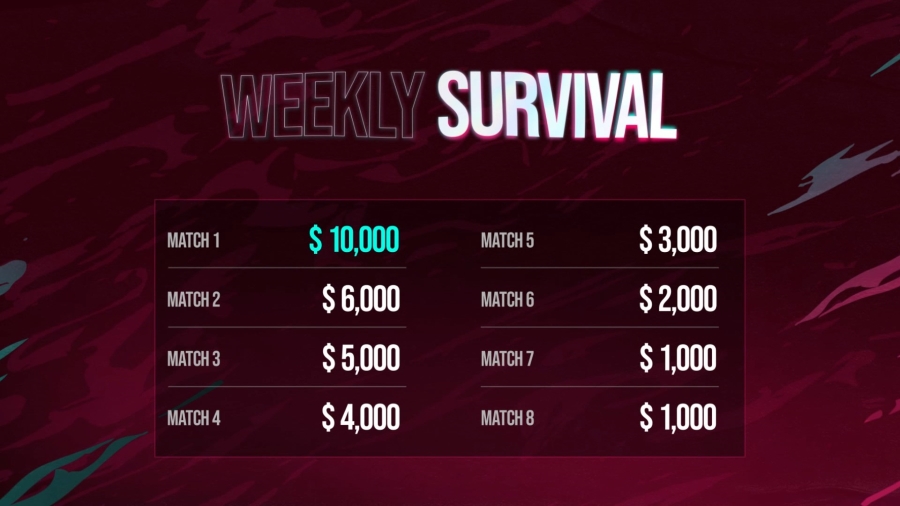 Moving on to the most exciting Weekly Final matches, where the 16 different teams which won chicken dinners throughout the whole week, will clash against each other, with a view to winning a large share of the tournament prize pool.

In each of these Weekly Finals, 4 teams that top the standings will share the prize pool of that week, depending on the points they have gathered. Whichever team that will come out with the highest number of prize-pool-shares at the end of the competition, will eventually end up winning the tournament.

The prize pool is so generous that it gets bigger every week. The tournament will start with a $50,000 first week and then go on to reach $1,000,000 in the last week (week 6). The teams which will fail to qualify for the Weekly Finals have no need to be worried as well, since they will also get to play a separate series of placement matches, in order to decide which rank they end up on, for the waiting list of the following week. A whopping 30% of the entire income from the in-game purchases of exclusive PGI.S items will also be added to the already-enormous prize pool of the tournament. This portion, though, will actually be divided to all the teams, in accordance with the final rankings of the tournament. 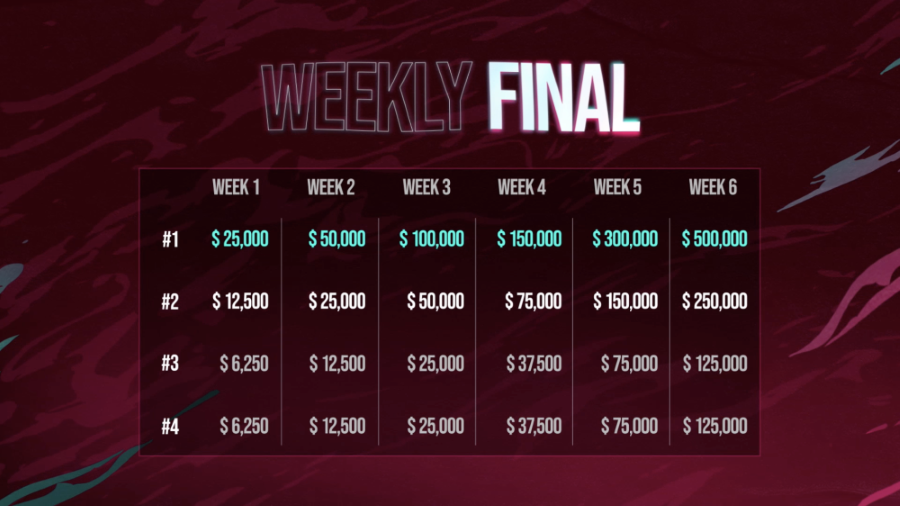 A whole lot of money involved in the Weekly Finals of the PGI.S 2021

The points distribution of the PGI.S looks like this:

Players and teams will get 1 point as well for each of their kills. There will be no placement point, though, for the teams finishing on the spots 9th to 16th. In the case of a tiebreaker, the team with the higher number of kills will have an advantage.

During the middle part of the tournament, there will be another separate event titled the “Survival Tournament”. It is being deemed as a specialty tournament and will be held during the break period right in between the six weeks of weekly action, from March 5 to March 7. As complicated as it is, this fresh and unique format of the PGI.S has attracted much enthusiasm and appreciation from fans, players and experts alike of Tencent’s popular battle royale title.

As the months go by, the competition will get tougher and tournaments will lead to one another. There will be another two PUBG Continental Series this year, which will ultimately lead up to the paramount PUBG competition of the year, the PUBG Global Championship 2021, which is scheduled to commence in November. 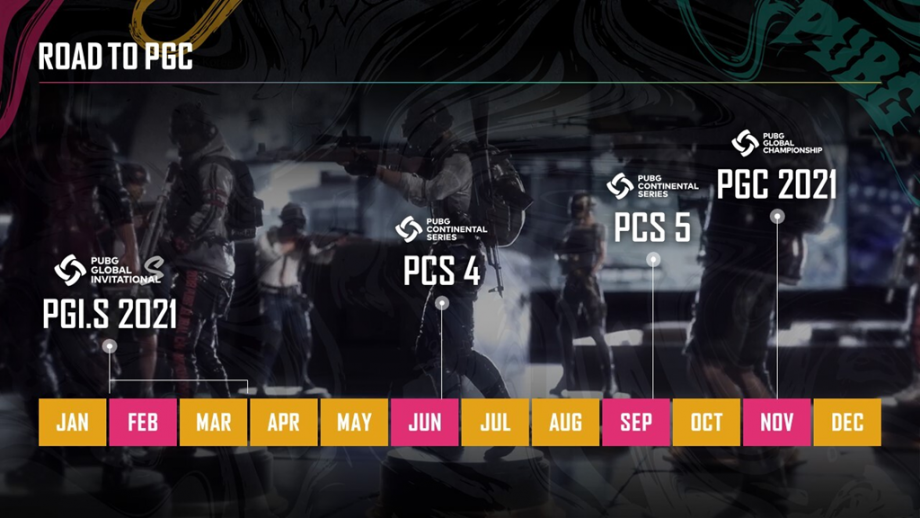