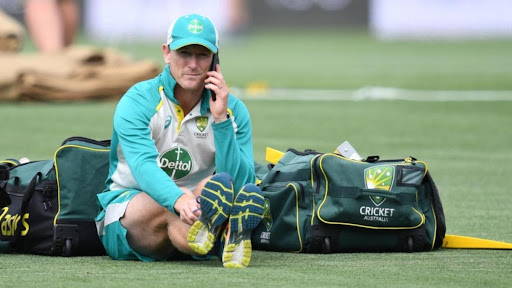 National selector George Bailey has included four players to the reservation list for the three-match test series against Pakistan while the standby players are Matt Renshaw, Nic Maddinson, Sean Abbot, and Mark Steketee.

Australia chief selector George Bailey had added four players to the reservation lists for the upcoming three-match Test series against Pakistan that is scheduled to start on March 4.

Bailey said that Matt Renshaw and Nic Maddinson have been added to the reservation list for batting while Sean Abbot and Mark Steketee added for the bowling if there’s an injury or illness ahead of the month long-away series.

“We’ve got four guys on standby,”

Bailey said on SEN 1170 The Run Home on Wednesday.

“That’s because of the risk of COVID and injury risk with some domestic cricket, plus these five internationals (T20s against Sri Lanka) over the next couple of weeks as well.

“Matt Renshaw and Nic Maddinson on the batting front I think are two guys that we’re really happy with how they’re going at the moment. We’re looking forward to them continuing their form over the next little period,”

Renshaw and Maddinson have already gotten into the roomy greens while the bowler’s Sean Abbot and Mark Steketee are yet to play test cricket.

“Sean Abbott and Mark Steketee on the bowling front,”

“They’ve both been around the Australian group at different times. Any of those four, when they do get their opportunity, I’m confident they’ll do a great job.”

It must be noted that this will be Australia’s first tour of Pakistan since 1998. They will play three Tests, three ODIs, and a T20I.

Australia last visited Pakistan in 1998 under Mark Taylor captaincy and have since then played Pakistan home series only at neutral venues including a test at Lord’s, Colombo, Headingley, Sharjah, Dubai, Abu Dhabi, etc.

The Australia squad was announced yesterday. They reserved 14 of the 15 players, who had recently won the Ashes series, with the only pace bowler Jhye Richardson being the only departure.

Other than, Ashton Agar, Josh Inglis, Mitchell Marsh, and Mitchell Swepson have also been added.