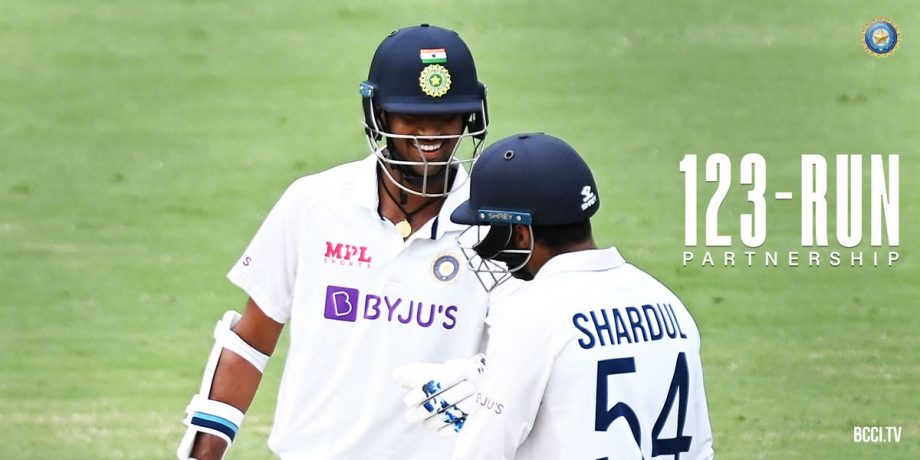 AUS vs IND, 4TH Test, Day 3: Washington Sundar and Shardul Thakur rescued India on day 3 at the Gabba after posting a total of 336 runs in their first innings. The duo gets praised by everyone for a record-breaking partnership, Australia leads by 54.

After bowling out the stubborn tail of India on 336, Australia led by 54 runs at the end of day 3 at the Gabba, Brisbane. The hosts ended the day on 21-0 in 6 overs with David Warner scoring 21* and Marcus Harris on 1*.

However, if we compare the stats, India was on top of the day after Sundar and Thakur playing brilliantly for their side.

The duo rescued India from a crucial situation as their 123 runs stand helped India in posting 336 runs, just short of 33 runs posted by Australia in the first innings.

The visitors had a rough start after Chetshwar Pujara and Ajinkiya Rahane managed to score only 25 and 37 runs respectively.

Mayank Agarwal and Rishabh Pant tried to steady the ship but they were outclassed by the Aussies bowling department on 38 and 23 respectively.

Things worked for India after the arrival of Sundar and Thakur, who played some amazing shots with persistence. Both of them scored their first half-centuries and rejected the Australian bowling line-up for quite some time.

Josh Hazlewood took a fifer from the bowling side. The hosts will be aiming to gain some momentum on day 4 to get some runs on the board.

Talking about praises, Indian skipper, Virat Kohli applauded the partnership scored by Shardul Thakur and Washington Sundar that helped India come out from a crucial situation.

‘Transition is not that difficult’

Virat Kohli tweeted on Sunday after the end of day 3 to praise the newcomers. He also added some Marathi words in his tweet to applaud the Mumbai pacer.

“Outstanding application and belief by @Sundarwashi5 and  @imShard. This is what test cricket is all about. Washy top composure on debut and tula para maanla re Thakur,”

Meanwhile, the Indian pacer, Shardul Thakur said that travelling with India A has helped players a lot in overseas conditions before making into the Indian senior squad.

“A-Tours are meant to give experience to your second lineup. It has helped a lot, we were here in 2016 and we played at the Allan Border Field. We played four-day games there, a pitch there is different, but at least you are used to Australian conditions when you take that leap from India A to the senior side, the transition is not that difficult, it is all about how you execute at the senior level,”