“Want to finish the IPL on a bit of a roll,” says MI pacer Daniel Sams  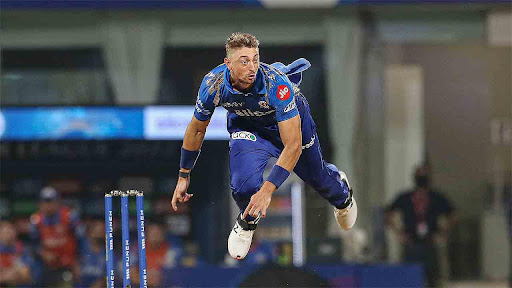 Mumbai Indian pacer Daniel Sams, who played a key role in the Mumbai Indian’s two successive wins in IPL 2022, says the five-time champions want to finish the season on a “bit of a roll”, having failed to make the playoffs.

Mumbai Indian pacer Daniel Sams, who played a key role in the Mumbai Indian’s two successive wins in IPL 2022, says the five-time champions want to finish the season on a “bit of a roll”, having failed to make the playoffs. Mumbai Indians are at the bottom of the table of points with eight losses and two wins.

“Obviously, we’re not going to be able to make the playoffs, but how we set up the rest of the tournament for us is, we’ve got a little ‘mini IPL’,”

Sams said on the eve of their game against Kolkata Knight Riders.

Sam, who has picked up seven wickets from as many matches, feels his teammates are motivated to win their remaining matches.

“So the last six games — we’ve played two of them already — we’re just kind of judging ourselves on that. Yes, this year we can’t make the playoffs but we can still build on a lot of things for the coming season.

“Motivation for the guys is we want to win the rest of our games. That’s actually what’s motivating us. We want to finish this IPL on a bit of a roll. We see our team as a really good team, and we want to prove that over the next coming days,”

Sams won the game for his side against Rajasthan Royals with a six and then bowled a brilliant last over against Gujarat Titans, where he defended nine runs to save his side from the defeat.

When Mumbai was played against KKR, Sam was taken for plenty by compatriot Pat Cummins, as he suffered 35 runs in an over.

The all-rounder revealed that he wasn’t bowling to his strengths but rectified it after a conversation with the support staff.

“That’s where it came about that I wasn’t quite bowling to my strengths. I was bowling my slower balls but I was bowling up rather than into the pitch. Through the conversations with, there was MJ (Mahela Jayawardene), Bondy (Shane Bond), Jasprit (Bunmrah), and a few others, I was able to realize why those things were happening and then rectify them in training. Work on a couple of things and then be able to stay calm,”