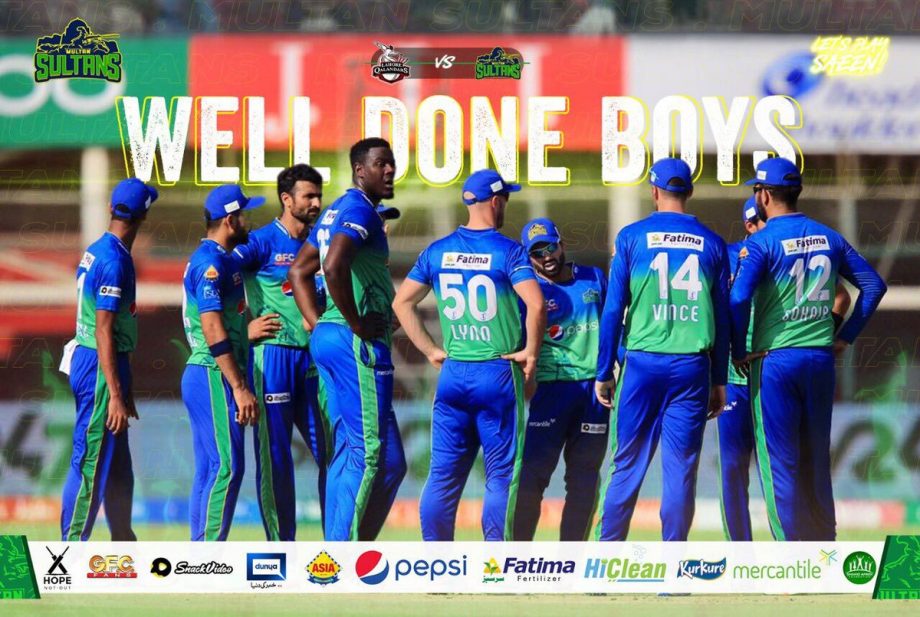 Multan Sultans chased down Lahore Qalandars 158 in 16.2 overs with 7 wickets in hand on Friday at National Stadium Karachi. Sohaib Maqsood and Mohammad Rizwan were the top scorers, Hafeez’s half-century went in vain.

Chasing 158, Qalandars started quite well as Shaheen Shah Afridi got a pick on his first delivery and Chris Lynn was his victim, bowling him straight in the wickets.

Qalandars introduced spin in the fourth over and it worked well straight away after Samit Patel removed James Vince on 5.

Despite the loss of two quick wickets, Rizwan took the advantage of his brilliant form while racing towards 44 off 22, taking Sultans to 58-2 at the end of power play.

The skipper completed his half-century in just 27 balls to steady his feet on the crease.

Sohaib Maqsood also joined the party with Rizwan after hitting a massive six to Patel. The duo made an outstanding 100 runs partnership in 59 balls to take Sultans closer to the target.

Qalandars brought Shaheen back into the attack as their last card in the game, dismissing the in-form Rizwan on 76.

However, Maqsood scored the winning runs to take Sultans across the line on the back of his unbeaten 61 off 41 balls. Sultans sealed the maiden victory of the season with 7 wickets in hand and 22 balls to spare.

“My hard work and bravery work thanks to Allah. The way our bowlers Sohail and Dahani and Qadir started, was great. Our lack of good performances in the death bowling was improved and so we restricted them. In any match, if you win you can’t relax after that. Previously we were losing despite dominating most of the match. In this game, we managed to carry the momentum. I don’t believe in toss dictating match results and chasing teams winning. If you bowl well at the death, get the yorkers in, then chasing teams can’t score. I decide the toss choice by gauging team strengths,”

Following the trend, Lahore Qalandars were asked to bat first after Multan Sultan won the coin flip. Qalandars were restricted to 157-6 in the given overs, despite the brilliant knock from the in-form batsman, Mohammad Hafeez (60).

Qalandars made a cautious start to their innings. The skipper, Sohail Akhtar, struggled to get going as he made only 7 from 12 balls before Usman Qadir caught him at the mid-wicket when he decided to take on Carlos Brathwaite.

Multan’s young gun, Shahnawaz Dhani continued to impress with his pace after removing Fakhar Zaman (9) in his second over, Mohamamd Rizwan took an easy catch.

With Lahore shivering on 25-2 at the end of power play, the veteran all-rounder, Mohammad Hafeez decided to accelerate the innings in the first over by Shahid Afridi and hit him with a sweet-sounding sixer over his head.

Denly following Hafeez also attacked Afridi before scoring 8 from 14 balls. After Afridi, Hafeez went on to Qadir resulting in a consecutive four and six respectively. He kept going like that until the completion of his half-century in 27 balls.

Brathwaite came into the attack after a time-out break and broke the 89 runs stand between the experienced duo, Denly was caught behind on 31 off 29. The West Indian all-rounder, Carlos Brathwaite was the top pick from bowlers after ending his fixtures on 2/19 in 4 overs.

Ben Dunk failed to perform again as he edged to Usman Qadir which went straight into the hands of Shahid Afridi.

Sultans got a lucky breakthrough in the 17th over as a mix up resulted in Hafeez getting run out on 60.

Samit Patel tried to sup up the innings with a decent total following his 26 off 20 balls but the excellent death bowling from Sohail Khan restricted Qalandars on 157-6.

“We were 15-20 runs short, also some bad fielding. We are seeing if we can get other spinners like Rashid. His exit has affected our bowling. Hope to find a replacement,”

said Sohail Akhtar in despair when asked about their performance.