The red-hot Scorchers have topped the points table on the back of Jason Roy’s brilliance, knocked down Stars 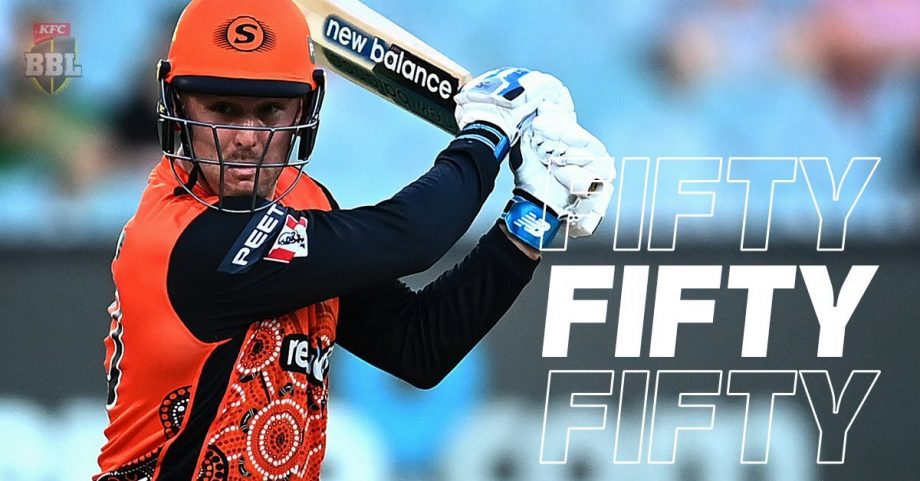 The hot Scorchers have displayed remarkable action in all the departments with a close 11 runs win over the inconsistent Melbourne Stars at MCG on Saturday.

The blistering knock of 70 off 44 balls from Stars batsman, Nick Larkin went in-vain as they could not chase the monstrous target of 182/4 by Scorchers on the back of Jason Roy’s 54 and Colin Munro’s improvised and unbeaten knock of 46 runs.

The Scorchers in-form and experienced bowling picked up the dangerous duo and Marcus Stoinis and Glenn Maxwell cheaply and kept Stars under their radar despite the efforts from Larkin.

Batting first, Scorchers put on an amazing show in the first overs as Jason Roy and Liam Livingstone put a thrilling 83 runs-stand before falling in a space of an over, leaving the Scorchers on 87/2 till the 11th over.

Josh Inglis scored a quick 26 off 16 while Colin Munro picked the innings from the middle overs till the end with a watchful unbeaten knock of 46 runs, Ashton Turner also contributed an unbeaten 18 off 9 balls to take Scorchers to 182/4.

Mitchell Marsh was the only disappointment in the batting as he came to the crease on 17th and played just four balls and gave an easy catch straight into the hands of Maxwell off Adam Zampa.

Billy Stanlake from Stars bowled superb overs as he conceded only 12 runs in the first three overs and closed his figures on 19 in the last over.

The Scorchers bowling line-up backed-up the efforts of their batsmen when the veteran Stars batsman, Marcus Stoinis picked-up by Jason Behrendorff in a wicket maiden over.

That dismissal left Stars on the back foot and things started getting worse when fellow batsman Seb Gotch was dismissed in the sixth over, done by Colin Munro in a run-out.

At that stage, Stars were looking towards Glenn Maxwell as their strong hope he disappointed the fans after getting dismissed by Fawad Ahmed on 1, caught by Ashton Turner. The dismissal made Brett Lee pass the strangest comment behind the mic.

“He can’t believe it. He cannot believe that. Maxwell has wound up, bang! You see his (Turner’s) reaction here, he’s almost blinking like a rat in a flour tin.”

After being asked about the strangest comparison by the co-commentators. Brett Lee replied:

“The way he was blinking after he caught it – you’d imagine a rat in a flour tin would be blinking, wouldn’t it?”

Jhye Richardson, the top wicket-taker of the campaign added another crucial wicket of Nic Maddinson 18 (16) to his account, AJ Tye caught at deep mid-wicket.

Nick Larkin has justified the decision of moving at the top order after smacking down a blistering half-century in 29 balls.

Nathan Coulter-Nile was looking to hit big before Ashton Turner picked him up on 7, ran back to catch the flyer from mid-on to long-on.

Nick Larkin was done by Andrew Tye on 70 (44), clean bowled after trying to hit a big shot.

Hilton Cartwright was firing his best in the depth but unfortunately, he could not match the strike rate of Clint Hinchcliffe and they fell short of 11 runs.

It was an all-round effort from Scorchers as Jason Behrendorff from the bowling unit picked up 1 wicket for 19 in four overs including a wicket maiden.

Melbourne Stars are currently at the fifth position and if they lost their last match of the campaign, they will have to say goodbye!